10) Ruud van Nistelrooy
There may be better players not on this list – and we did spend rather a long time debating some of the names at the bottom of this top ten – but none have scored as many Champions League goals (56) as the Dutchman without ever winning the trophy. He never even made it to a final. The closest he came was in 2002, when Manchester United lost on away goals to Bayer Leverkusen in the semi-finals. Those who believe that Sir Alex Ferguson never erred on the side of conservatism should note that he was roundly criticised for playing Van Nistelrooy as a lone striker in Germany after a 2-2 home draw.

9) Patrick Vieira
A wonderful player but, unlike the equally wonderful Thierry Henry, he did not leave Arsenal and claim a Champions League trophy elsewhere. Instead, he left Arsenal and played them in the quarter-finals of the Champions League while in Juventus colours. It did not go well. As Alan Smith wrote in the Telegraph:

‘This Champions League tussle had gone worse than Vieira could ever have anticipated. Humiliated by his old side, booed by his old fans, the Juventus player’s performance had gone some way to vindicating Arsene Wenger’s decision last summer to say a sad farewell.

‘You know you’ve been slow to react when Robert Pires, not exactly known for his tackling, pinches the ball from behind with a neat sliding challenge. That ignomy befell Vieira on the halfway line just before half-time and if that made him feel bad what happened next would only have made things much worse. The resulting move was both simple and devastating. Pires to Thierry Henry, Henry to Fabregas.’

To add insult to injury, he then picked up a booking that ruled him out of the second leg. And if you think that went badly, imagine leaving Inter Milan in January 2010 before they won the Champions League that May. 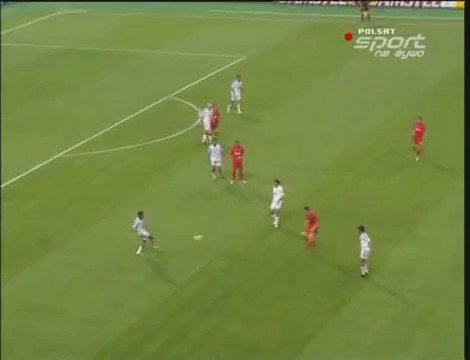 Hernan Crespo’s goal against Liverpool in the 2005 Champions League Final. What a pass from Kaka! @Crespo @KAKA

Crespo went on to win four straight league titles with first Chelsea and then Inter Milan but never again reached a Champions League final, falling at the last-16 stage with alarming regularity; he was part of the Chelsea side who lost to Barcelona in 2006. He would later bow out of the Champions League with 25 goals in 65 games but no trophy.

7) Pavel Nedved
Agony and ecstasy. Hero to zero. No game of football captures those tired old cliches better than the Champions League semi-final clash between Real Madrid and Juventus when the brilliant Czech midfielder Pavel Nedved scored a glorious goal to help his team to the final and then needlessly hacked at the ankle of Steve McManaman to rule himself out of said final. 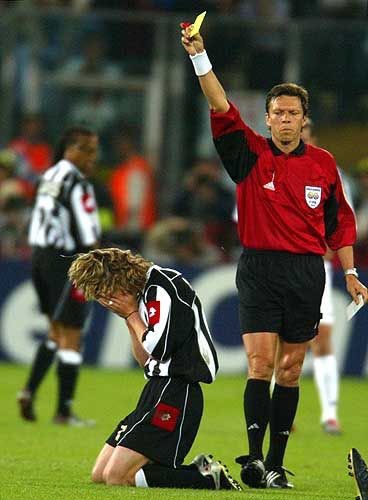 He did still win the Ballon d’Or that season but he remained devastated throughout his career, dedicating a whole chapter of his autobiography to the disappointment. He would go on to reach two more quarter-finals – losing to first Liverpool and then Arsenal in Juventus colours – but he twice missed out on the chance of redemption.

6) Fabio Cannavaro
The last player to win the Ballon d’Or without ever claiming the Champions League, the Italian is undoubtedly one of the finest defenders of the modern age. But where Djimi Traore has triumphed, Fabio Cannavaro has failed. He did reach one semi-final with Inter but painfully lost to AC Milan on away goals (even though both legs were played on the same ground) and would never again reach that stage with either Juventus or Real Madrid.

He played alongside Nedved in that Juventus side that lost successive quarter-finals to English opposition, and then was unlucky enough to play for Real Madrid in that cursed era when they could not make it past the last 16. He was 35 when he suffered the ignominy of losing 5-0 on aggregate to a Liverpool side featuring Andrea Dossena and Jay Spearing. “Giorgio Chiellini is my heir,” he said on retirement; it’s probably not a crown Chellini relishes when it comes to the Champions League.

5) Dennis Bergkamp
“It was somehow you’re building up and up and getting all the trophies and getting personal success and in the end you get to the Champions League final at last. Jeez! If only I’d been five years younger!” said the Dutch master when recalling the moment he finally reached a Champions League final with Arsenal at his eighth attempt. But then – with Arsene Wenger set on giving him a few minutes in what would have been his final appearance in an Arsenal shirt – Jens Lehmann was sent off and the Frenchman was limited in his tactical substitutions. It was not to be.

Bergkamp did retire with two UEFA Cups to his name (one with Ajax and one with Juventus) but he would never add the big one. Some might say that he should forfeit his place on this list because he refused to fly to so many European away games, but he remained a great player even when grounded. And he did make it to Paris on the Eurostar.

4) Gabriel Batistuta
What a player. What a legend. What a bloody icon. And yet he never even advanced into the knock-out stages of the Champions League. He did score some quite magnificent goals at English grounds, mind… 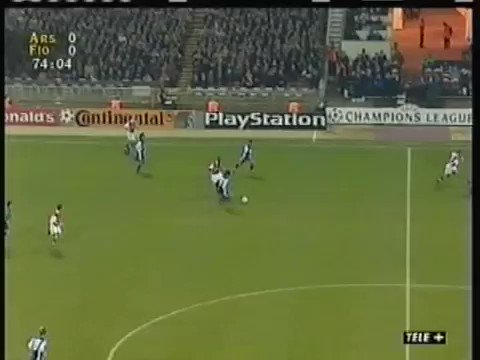 Those goals came in the season Batistuta had finished third in the FIFA World Player of the Year voting despite not actually winning anything of real note. Finishing third in Serie A with Fiorentina and still being voted third best player in the world; that was Batigol.

But for all those near-misses, Ibrahimovic has only scored ten goals in 40 Champions League knock-out ties, and three of those game in his final season at PSG against English opposition. He can only have himself to blame (and Pep Guardiola for subbing him in that 2010 semi-final when he was chasing a goal) for his lack of big European medals.

He does have one more chance though…

Three finals and three defeats for one of the world’s greatest goalkeepers.

“I want to end my career with a big victory. Twelve years ago, I won the World Cup, yet I’ve lost three Champions League finals,” said Buffon in October as he announced that he would retire at the end of this season unless he finally wins the Champions League. Right now it looks very likely indeed that he will retire having never won that elusive trophy. Because, well, he was a bit sh*t against Tottenham.

Buffon should’ve done better in both of Tottenham’s goals, but he’ll escape criticism because he’s old and deserves a Champions League because fuck logic

“Losing on penalties in 2003 was very painful, but since I was only 25, I was fairly calm because I was convinced I’d win many more. That’s the exuberance of youth,” said the Italian international, who is now lacking youth if not exuberance. And still lacking that trophy. But at least he is in good company…

1) Ronaldo
Simply one of the greatest footballers in history and yet he played in only 40 Champions League matches, limited by timing and then injury. He played for PSV and Barcelona in lesser European competitions and then his one campaign with Inter Milan ended against Manchester United with the two-time World Player of the Year missing the first leg and limping through an hour of the second leg.

Of course, 2003 – after a switch to Real Madrid – should have been his year, and many would have handed him a Champions League medal after his hat-trick against Manchester United at Old Trafford. They faced Juventus in the semi-finals and Ronaldo scored the opening goal of the tie in Madrid, but injury struck once again and he played only 38 minutes of the second leg. The following year they drew Monaco in the quarter-finals and this was to be Ronaldo and Real’s year; but they shockingly flopped thanks in part to his on-loan Real teammate Fernando Morientes. At 27, Ronaldo should have had other chances. But at 29, he played his final Champions League game. Fittingly, he scored twice.