As school pupils in the early 80’s, yours faithfully became very fascinated whenever it was time for the young, energetic and smartly dressed participants of the National Youth Service Corps (NYSC) to be deployed to our rural community of Kafanchan, in Kaduna State.
The reason for this peculiar fascination and unquenchable excitement can be anchored on the multifaceted roles these young graduates of Nigerian tertiary institutions play during their services to the nation within the time frame of twelve calendar months.
Amongst these youth corpers deployed to our community were medical doctors, Pharmacists, law scholars and educationists.
A fundamental fact of the gross state of rural poverty and lack of infrastructural facilities remains the dearth of qualified medical workers willing to be posted to the rural communities. In terms of development, most rural communities are left many years behind when compared to the state of social amenities that are built in some urban centers even though much of these facilities are in rapid decline in terms of functional efficiency and effectiveness.
The latest practice of public/private partnership whereby most state governments especially in Southern Nigeria have concessioned and outsourced the control and management of hitherto public health institutions to private administrators out to maximize profits and return on investments has made the critical provisions of public healthcare to rural poor difficult and non available. The rate of unemployment keeps expanding thereby shrinking the spending capacity of millions of Nigerians.
Therefore, the posting of young medical graduates to rural health facilities by the management of the National Youth Service Corp (NYSC) has consistently bridged the yawning gaps in the lack of adequate medical workers that are posted to work amongst the rural communities.
There is no gainsaying the fact that the right to access quality healthcare is a sine qua non in the implementation and enforcement of all relevant laws on human rights as enshrined in constitution of the Federal Republic of Nigeria. The Universal Declarations of HUMAN RIGHTS (UDHR) makes public and primary healthcare for the poor free and compulsory.
However, there is always a lacuna when critically assessing the budgetary releases made to the critical health sector vis-à-vis the imperative of safeguarding the health and well-being of the people. Health sector has always suffered neglects in the budget circles operated at both the national and sub-national levels.
As stated above, the right to quality healthcare is at the core of the essential demand for the enforcement of human rights laws.
Indeed the Nigerian constitution rates the protection and promotion of the well-being of the people as the primary duty of government. 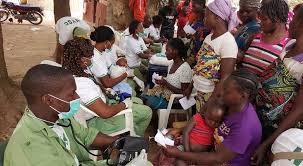 Health is not only wealth but health of the population provides the safety net for the protection of national security.
In section 14 (2) (b) of the Nigerian Constitution we are told that “the security and welfare of the people shall be the primal purpose of government.”
The constitution in section 17 (3) (c) (d) states thus: “the health, safety and welfare of all person in employment are safeguarded and not endangered or abused” and that “there are adequate medical and health facilities for all persons.”
These provisions enshrined in chapter two were further elevated and made enforceable in chapter 4 when the framers of the constitution affirmed in section 33 (1) that “every person has a right to life…”
However, one factor that has contributed to exposing the lives of many poor Nigerians to the danger of sudden death are the insufficient or even total lack of workable healthcare facilities especially in the rural communities.
There are nearly 80 million Nigerians that hovers around the arena of absolute poverty and therefore are exposed to early deaths due to lack of adequate healthcare.
Professor Nimi D. Briggs of the University of Port Harcourt, Nigeria did a research on the dismal health indices of most African countries in his piece titled: “Poor Health as an Index of Human insecurity in Africa,” which is published as chapter 17 in the book entitled “Human security in Africa: perspectives on education, health and Agriculture,” co-edited by Olusegun Obasanjo; Akin Mabogunje and Peter Okebukola.
Professor Briggs argued thus: “Several indices exist which describe the state of health of a people. For the purpose of this paper, only the following will be considered as they, additionally, give some indication of the standard of public health measures in an environment, which promote the health of the generality of the people: Life Expectancy at Birth; Crude Birth Rate; Crude Death Rate; Under Five Mortality; and Maternal Mortality.”
“Many diseases cause mortality and morbidity in Africa and contribute to the heinous health statistics that have just been considered. A few will be examined in this paper; emphasis being placed on those that affect large sections of the population, especially the most vulnerable groups. The diseases include malaria, diseases associated with intestinal hurry, vaccine preventable diseases (VPDs), acute respiratory tract infections, as well as HIV/AIDS along with tuberculosis, which has made a recrudescence.”
Professor Nimi Briggs also argued rightly that several childhood diseases are preventable by vaccines. They include poliomyelitis, tuberculosis, diphtheria, whooping cough, measles and tetanus. He also recalled that infant immunisation has become an effective public health intervention tp reduce the morbidity and mortality of vaccine-preventable diseases. He lamented that whereas developed Countries have used this measure to great effect and have succeeded in drastically reducing Childhood deaths and ill-health from the vaccine-preventable diseases (VPD) some developing countries , especially those in sub-Saharan Africa fail to achieve desirable vaccination coverage for several reasons notably cultural taboos, epileptic electricity for vaccine preservation and inadequate campaign strategy. 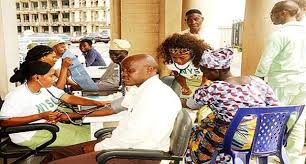 Also the widespread cases of corruption by healthcare services’ providers have also created spectacular nightmares for most rural poor in need of public healthcare. Recently, we learnt of the death of over 500 people in the last two months in the North Central region of Nigeria from snake bites because of lack of vaccines to prevent these deaths. Last year, the news hit the airwaves that Federal ministry of health and the National Action Committee on HIV/AIDS allowed vaccines worth billions were left to rot away even as hundreds of thousands of Nigerians living positively with HIV/AIDS are left to die.
Inadequate funding of health institutions and related organizations on health matters in Nigeria as reflected in the budgetary allocation to the health sector which has always been on the average of 2% is affecting health delivery in our rural areas.
This is less than the minimum of 5% of total budget outlay recommended by the World Health Organization (WHO).
This has been the scenario under which the rural dwellers have lived their lives daily coupled with the disproportional rate of child delivery without adequate plan on how to give them meaningful and purposeful upbringing.
It was in recognition of these shortcomings and in a bid to bridge the widening gap unleashed by difficulty in accessing qualitative and affordable healthcare services especially in the rural areas that the National Youth Services Corps (NYSC) in 2014 instituted the Health Initiative for Rural Dwellers (HIRD) while meeting up with one of the objectives of setting up the Scheme which is to contribute to the growth of the national economy.
The programme reportedly affords the Scheme the opportunity of deploying its vast skilled medical manpower to these rural areas in order to achieve universal health coverage as well as contribute towards the country achieving one of the Sustainable Development Goals (SDG’s).
The programme also galvanizes support and partnerships from stakeholders in term of provision and free administration of prescribed drugs to the rural dwellers.
The NYSC HIRD encompasses diagnosis, medical check-ups, health advocacy as well as treatment of ailments. Other health support services like the provision of wheel chair, optical services and issuance of eye glasses are also part of the programme.
It could be recalled that in 2015, while a total of 125,000 patients were projected to benefit from the programme about 77,000 actually benefited which is about 61.6% success rate.
From statistical data obtained by us, in 2016, a total of 86,000 patients benefited nationwide in the HIRD programme nationwide which enjoyed the partnership of Grace for Impact, a Non-Governmental Organization.
Furthermore, a total of 120 wheelchairs were reportedly procured and distributed to some physically challenged rural dwellers, nationwide.
The (HIRD) programme has over the years received various commendations from the patients, traditional and religious leaders as well as officials of governments at the local, state and national levels.
The scheme has been commended for this initiative which has revived hope in the lives of the rural dwellers and made health care services affordable and accessible.
They also expressed their optimism and prayed that the programme be sustained as well as expanded in its scope.
As human rights practitioners, we at the HUMAN RIGHTS WRITERS ASSOCIATION OF NIGERIA (HURIWA),  we are of the firm belief that the National Youth Service Corp (NYSC) should be encouraged to continue with these critical interventions which have largely saved the precious lives of poor rural dwellers.
It is the recommendation of our platform that key players in the private sector should be made to as a matter of urgency to contribute at least five percent of their annual corporate social responsibility projects to a dedicated accounts with the Central Bank of Nigeria for the management of the NYSC to invest these resources towards the sustenance of the services rendered under the health initiatives for rural dwellers being spearheaded by the NYSC’s management.
The management of the NYSC should find ways and means of partnering with foreign donor agencies such as the World Health Organization and several other charitable foundations abroad and locally so as to attract generous donations that should be transparently applied towards the implementation of the scheme.
The National Assembly can as well pass a legislation that could make it mandatory for such humanitarian initiative to enjoy the sponsorship of all big industries doing businesses in Nigeria as a way of paying back to the Nigeria people for providing the enabling environment for these businesses to thrive. Federal Government on its part should concede some percentage of tax waivers for these corporate organisations that are up and doing in contributing towards the provisions of subsidized health-care services to poor rural dwellers. Proper auditing and effective monitoring by credible non-Governmental organisations to ensure that these contributions are made and adequately utilized.
*Emmanuel Onwubiko is head of HUMAN RIGHTS WRITERS ASSOCIATION OF NIGERIA (HURIWA) and blogs @www.emmanuelonwubiko.com; www.huriwanigeria.com.