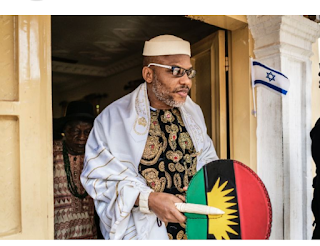 Former Abia State Governor, Orji Uzor Kalu, has claimed that the leader of the Indigenous People of Biafra (IPOB), Nnamdi Kanu, is hiding in London and escaped from Nigeria through Malaysia.
In an interview with thePunch, Kalu also revealed that he went looking for Kanu, ever since he was declared missing, following a Military raid in his home in Abia State.
He said: “Kanu was not taken away by the military. Kanu went to Malaysia from where he travelled to the United Kingdom. Nnamdi Kanu is in London right now as we speak. He was not arrested by anybody. He left the country on his own.
“One of his relations has spoken to me and explained everything because I wanted to see him and talk to him wherever he was and see how I could meet some Federal Government officials on his issue. I also wanted to see ways of talking to the President about him, and find common ground but his family told me that he has left the country, unless they are lying to me.
“I believe, whether he had left the country or not, he is not with the military because I asked the Commander of the 14 Brigade, Brig.-Gen. A.K Ibrahim, who is a very fine and good soldier, well educated and dedicated, and he told me that they don’t know his whereabouts and I am sure, the Department of State Services have the same information. I also visited the commissioner of police and he said he didn’t know his whereabouts and that they are also looking for him.”
Source , Punch

WHERE IS THE NATIONAL ASSEMBLY? BY EMMANUEL ONWUBIKO

PMB: THEORY AND PRACTICE OF IGBO MARGINALIZATION BY EMMANUEL ONWUBIKO