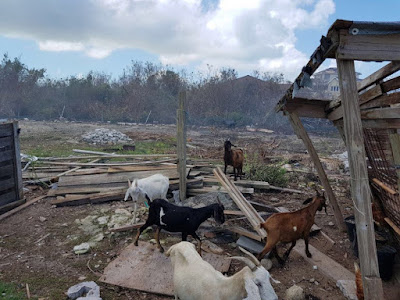 Category 5 storm Hurricane Maria is following the same destructive path across the Caribbean as Hurricane Irma. We’re still protecting vulnerable animals affected by Irma, but fear they’ll be in even more danger after this second storm
Thousands of people’s and animals’ lives were devastated by Hurricane Irma, which hit the Caribbean September 7. Now another huge hurricane threatens to cause even more damage.
Our disaster response teams are in Antigua and Barbuda, St Kitts, St Maarten and Turks and Caicos working hard to feed, rescue, and deliver medical care to desperate animals affected by Irma.
Aside from having to evacuate Barbuda and St Maarten, our teams are still on the islands. As Hurricane Maria moves in, our teams have sought shelter and unfortunately must wait out the storm before resuming their work.
“It is very frustrating that as we are all ready to get our plans into action, we are delayed again by another massive storm,” said Scott Cantin from our disaster management team, who is currently in Antigua.
“I fear for the animals on Barbuda especially and can only hope they are spared the full brunt of Maria when she passes.”
Advice for animal owners
Yesterday we sent disaster preparation advice for Hurricane Maria out to many local radio stations and media, so it can be announced to pet and farm animal owners.
If they can bring their animals, we’re advising animal owners to bring a 72-hour supply of suitable food and water, travel with an emergency kit for the animals, and bring any important documents for the animals, such as identification.
If animal owners have no choice but to leave them behind when evacuating, we’re advising that they move them to higher ground, leave 72-hours-worth of food, and untie them so they can swim or escape if they need to.
Being prepared for disasters is vital. It saves animals’ lives.
Help after Hurricane Irma
In Turks and Caicos, about half of the islands’ infrastructure was severely damaged by Hurricane Irma. Luckily, however, in Grand Turk island there are only around 72 horses, 167 donkeys, and some cattle, pigs, goats and poultry there, and most of them survived.
In St Maarten, most pets that were left behind have been taken in by neighbours or other people on the island who can take care of them. We’re working to reunite dogs with their owners who had to evacuate.
The small island of Barbuda was hit hard by Irma. Our teams have been driving around feeding and treating animals, and they’ve also rescued and rehomed cats and dogs.
https://www.worldanimalprotection.us.org/news/just-animals-begin-recover-hurricane-irma-new-disaster-approaches
FROM THE DESK OF ANIMAL RIGHTS WRITERS ASSOCIATION OF NIGERIA