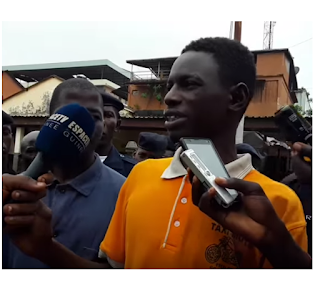 A thief in Guinea who goes by the name, Boubacar Diallo congratulated the police for catching him in a video that is going viral on social media in the country.
Diallo, a student at a technical college in Mamou, and his accomplice freely admitted having stolen 50m Guinean francs ($5,600; £4,160) from a phone shop in the northwestern city.
In front of the cameras, Diallo called for more resources to be given to the police. In his words, ‘the national police head office should be congratulated. I also want to say that the police needs equipment because it has well-trained officers’.
Then, he added that he never imagined that he would be caught so quickly and said he regretted his crime.

FG Is Provoking Us To War” – IPOB Leader, Nnamdi Kanu, Speaks On The Alleged Invasion Of His Home By The Army