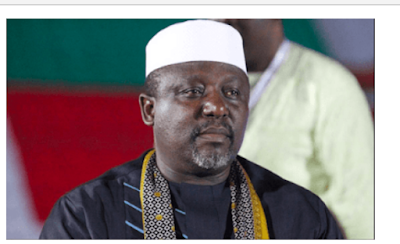 A Pro-democracy and non-governmental organization-HUMAN RIGHTS WRITERS ASSOCIATION OF NIGERIA (HURIWA) has expressed alarm at the growing suppression of media rights in Kaduna and Imo states.
Besides, the Rights group has cautioned the Imo state governor Mr. Rochas Okorocha to stop the extreme imposition of tax in Owerri given that his administration has in the last seven years failed spectacularly to create the enabling environment to grow the private sector in the state and create vibrant manufacturing sector that would have generated jobs for millions of jobless youths.
The group said the Imo state governor must be made to render account of the huge federally generated revenues that accrued to Imo state in the last seven years including the two previous tranches of Paris Club Refund running into billions.
“Rochas Okorocha is indebted to pensioners and workers for many months and hasn’t been accountable with Imo state resources but has now become an eleventh hour emperor unleashing taxation venoms on struggling families and discouraging Igbo in diaspora from investing in  the state given the unfriendly tax policies and the  rising incidences of violent crimes due to joblessness and restiveness of millions of youth. The bad policies of Rochas Okorocha must be stopped to save people from being economically exterminated.”
On the issue of the stifling of spaces for media freedoms in Imo and Kaduna states, HURIWA criticized the Imo state governor for purportedly expelling the state correspondents of Thisday and Vanguard Newspapers because they maintained their independence and credible reporting styles.
Besides, HURIWA said the Kaduna state governor Alhaji Nasir Elruffai had locked up a former correspondent of Vanguard Mr. Luka Biniyat in the Kaduna Federal prisons for months for allegedly reporting the armed Fulani invasion of a part of Kaduna state and the killing of undetermined number of people in the largely Christian dominated Southern Kaduna.
The Rights group said it was inexplicable that the judiciary in Kaduna state has now become a stumbling block to the enjoyment of the fundamental human rights to media freedoms.
In a statement jointly authorized by the National Coordinator Comrade Emmanuel Onwubiko and the National Media Affairs Director Miss Zainab Yusuf, HURIWA criticized the seemingly unattainable bail conditions slammed on the now disengaged senior journalist in Kaduna Mr. Luka Biniyat in a matter that ordinarily is bailable.
“We suspect that the Kaduna state governor is working in cohoot with the Kaduna state judiciary given that state judiciary in most states are not completely independent financially from the apron strings of the almighty state governord who are the chief executives of the states.”
HURIWA also recalled that in the last two years, nearly five Nigerians reporters and social media commentators have had brushes with the Kaduna state governor following their reports and opinions about the prolonged Southern Kaduna massacre by armed Fulani herdsmen.
The Kaduna state governor is a Fulani by ethnicity and a Muslim from Kaduna North.
HURIWA recalled that the Kaduna state governor, who was earlier quoted as telling the media that his administration paid off killer Fulani herdsmen to end their attacks in Southern Kaduna, has also threatened to deal with any media worker who takes undue interest in reporting about the Southern Kaduna genocide which has claimed over 2,000 persons.
The Rights group has therefore asked the Kaduna state High Court to vary the conditions for granting bail to the detained journalist Mr Biniyat so he can attend to his failing health just as the group urged the Kaduna state helmsman to end the siege against the media by withdrawing his litigation against the erstwhile Vanguard Newspaper’s bureau Chief in Kaduna Mr. Luka Biniyat.
HURIWA recalled that the Kaduna High Court had on July 20, 2017 granted Biniyat bail or be remanded in prison till August 31, 2017 should he failed to meet the conditions.
The presiding judge Alhaji Bashir Sukola who granted the application in the sum of N10 million with two sureties in the like sum and a bank bond in same amount, with deposition of the sureties’ international passport ordered that Binniyat be remanded in prison until he was able to meet the conditions and had since then remained in prison for his inability to meet the conditions.
Similarly, the Imo State Governor, Rochas Okorocha, carried out his threat against journalists operating in the state, banning the Correspondents of THISDAY and Vanguard Newspapers, Amby Uneze and Chidi Nkwopara, from covering government house activities.
The governor did not give any reason for his action other than that the said correspondents do not like him.
Declaring the correspondents as enemies of government for not writing favorable reports to suit his bidding, last Saturday night in an interactive session with journalists in the state at the government house, Rochas Okorocha couldn’t point out any of the ethics of the journalism profession which the correspondents violated.
Imo state governor vowed to deal ruthlessly with the reporters if they dare to show face inside government house to cover any of his activities, insisting that he would take it up with their respective headquarters to ensure they are posted out of the state.
But     HURIWA asked the Imo state governor to withdraw his threats because section 22 of the constitution had tasked journalists to be the public conscience and monitor elected officials to ensure good governance and respect for human rights.
Moreover, the Rights group reminded him that government house in Owerri belongs to the people of the state and not his personal estate.
The rights group told Rochas Okorocha to stop behaving like an emperor by going after independent media and also introducing toxic taxations aimed at indirectly confiscating housing assets belonging to hard working Imo state indigenes.

The verified situation of Abia state