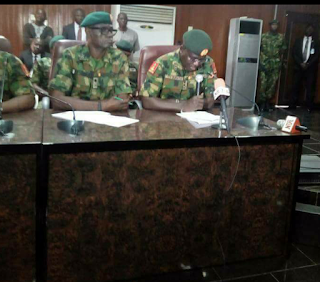 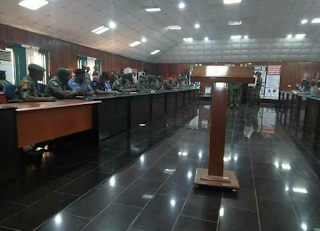 The Chief of army staff (COAS) General. Tukur Yusuf Buratai is right now in Ebonyi state to brief the state of the operation python dance II. He said that the operation is purely to maintain internal security and it will abide by the constitutional civility and obedience to the rule of law.
According to the coas the exercise had commenced two days ago in the south eastern region. That it covers the entire south eastern states.
He however assured the masses to go about their business law abiding and entertain no fear.
Received on behalf of the governor by the acting governor the deputy Dr. Eric Kelechi Igwe requested from the army that the state would appreciate that her citizens is not molested in any form since this state is reputable peaceful state.
The Chief of army staff assured him of orderly conduct by his men.
Source; https://www.nationalhelm.co/2017/09/egwu-eke-2-storms-ebonyi-state-general-tukur-yusuf-brutai-in-abia-state.html