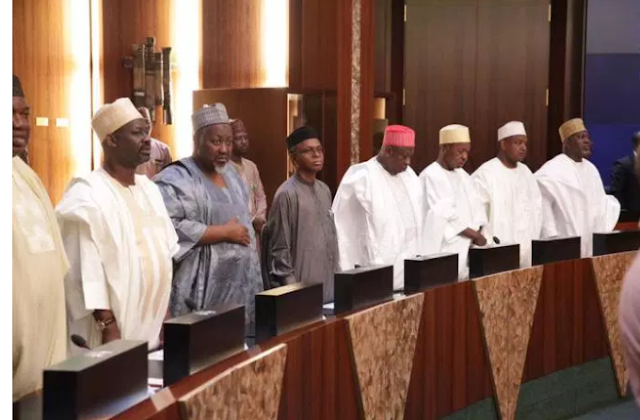 President Muhammadu Buhari has sent northern governors to the south-east in a bid to secure peace
TheCable understands.
In addition to south-eastern states, they will also visit Cross River and Rivers.
The team of five governors is led by Kashim Shetimma (Borno), who is also the chairman of northern governors forum.
Others on the peace mission are Aminu Masari (Katsina), Aminu Tambuwal (Sokoto), Atiku Bagudu (Kebbi) and Abdullahi Ganduje (Kano).
Before leaving for the US on Sunday, the president met with Ganduje, Shettima and Tambuwal.
The deployment of soldiers to the south-east to quest secessionist agitations by the Indigenous People of Biafra (IPOB) has generated a lot of heat in the last two weeks.
Governors from the south-east had proscribed the activities of IPOB to douse tension in the region.
Okezie Ikpeazu, governor of Abia state, said the action helped in averting what could have been the greatest bloodbath in history.
But Senate President Bukola Saraki described the ban as unconstitutional and also faulted the tagging of IPOB as a terrorist group.
Saraki asked Buhari to initiate the right process of declaring IPOB a terrorist group, saying this would demonstrate to the world at large that “we are a country that operates by laid down process”.
Nnamdi Kanu, leader of the group, went into hiding after troops invaded his community in Abia.
Source: thecable

A Thief congratulates police for arresting him.