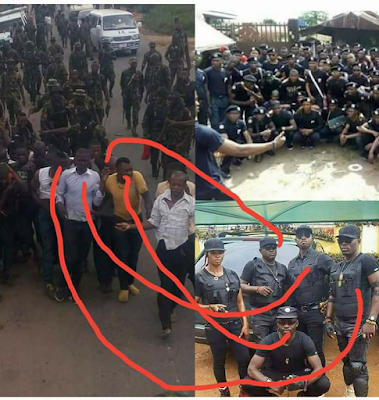 UMUAHIA—The Abia State Police Commissioner, Anthony Ogbizi, has said that with the proscription of Indigenous People of Biafra, IPOB, by governors in the South-East and its declaration as a terrorist group by Defence Headquarters, arrested IPOB members would be tried as terrorists and anybody found with Biafra materials would be arrested and prosecuted.
This came as President Muhammadu Buhari, yesterday, held a closed-door meeting with some northern governors before departing for New York where he will be attending the 72nd Session of the United Nations General Assembly, UNGA.
This is even as former President Goodluck Jonathan has called for peaceful coexistence among the different ethnic nationalities.
In a related development, President of the Senate, Dr Bukola Saraki, said the Senate would meet with security chiefs to chart a path for resolution of contentious issues engendering tension in the South-East.
IPOB members to be tried for murder
Ogbizi disclosed this at a media briefing where he paraded seven of the suspected members of IPOB at Ariaria police station in Aba.
The Police said they have arrested 59 suspected members of IPOB, in Abia State. They also confirmed the death of an officer after an attack by members of the now outlawed group.
He said the suspects would be prosecuted under the anti-terrorism act to ensure they were properly dealt with.
While restating what the army had earlier said, Ogbizi said IPOB had shown itself to be a “terrorist group,” which must be dealt with as such.
Ogbizi said the army recovered several exhibits, including the coat of arms of Biafra from the suspects, adding: “As I am talking to you now, information reaching me said they have started gathering at Nnamdi Kanu’s house.”
Ogbizi called on citizens to volunteer information on the whereabouts of Nnamdi Kanu, leader of IPOB and denied the rumours circulating in the state that security agents arrested Kanu’s father.
Source: Vanguard

Biafra: Orji Kalu reveals that KANU is in London, and how he escaped from Nigeria