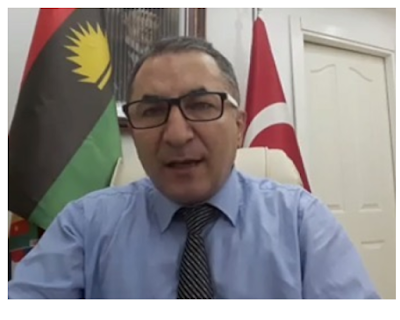 The Turkish Embassy in Nigeria has restated its commitment to the territorial integrity and political unity of the country.
In a statement issued from its base in Abuja, the government of Turkey disowned its citizen, Abdülkadir Erkahrama who publicly supports Nnamdi Kanu and the calls for Biafra.
The statement reads,
‘as it has clearly been stated by the Press Release of the Turkish Embassy in Abuja dated on September 16, 2017, Turkish citizen Abdülkadir Erkahraman who has no connection with Turkish corps diplomatic or officially represents the Turkish government in Nigeria; also has no connection with DE?K’s Turkey-Nigeria Business Council operating under DE?K’s umbrella since 2011 and DT?K (World Turkish Business Council).
DE?K, being Turkey’s sole institution entitled to shape our country’s foreign economic relations around the globe has full respect to Federal Republic of Nigeria’s unity, sovereignty, independence and political structure. To that end DE?K’s Turkey-Nigeria Business Council remains committed to establish long-term economic and commercial ties with Nigeria based on win-win principle that will mutually benefit our nations. Certainly any action taken by person/persons who has no official connection with our country’s diplomatic mission will harm the amicable relation among our nations.
To that end as DE?K, DT?K and DE?K’s Turkey-Nigeria Business Council we call all parties and our counterparts in Nigeria to disregard such person/persons whose actions potentially harm the relations among our nations and invite all representatives of Nigerian business world to directly communicate with DE?K, DT?K and DE?K’s Turkey-Nigeria Business Council in matters related to any economic and commercial activity between Turkey and Nigeria.
Respectfully announced to the public.

Checkout this throw back photo of IPOB leader, Nnamdi Kanu, kissing his wife on the streets of London