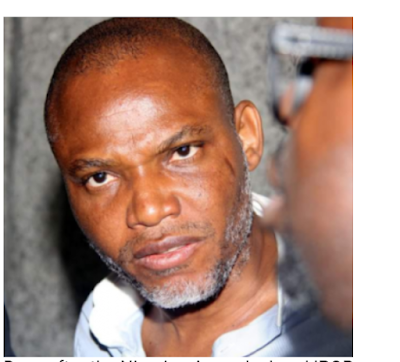 Days after the Nigerian Army declared IPOB a terrorist militant organization, leader of the group, Nnamdi Kanu, has reportedly gone into hiding. According to Members of the secessionist group, Kanu was advised to go into hiding so as to avoid being re-arrested and tried for terrorism. They say it would be better for him to operate from a hideout than publicly.
Meanwhile, security agents like the Army, Police, and DSS have launched a search for Kanu and members of his group. They are said to be combing the length and breadth of the South East in search of the secessionist group leader.
Last Friday, the Army declared IPOB a militant terrorist group after some members of the group confronted Army officers who attempted to pass through the home of the leader in Umuahia in Abia state. The faceoff later spread to Aba and Rivers state. Seven persons were reportedly killed while many others were injured.