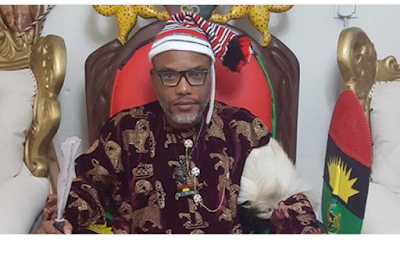 Yesterday, members of the Indigenous People of Biafra IPOB and some officers of the Nigerian army had a clash in Umuahia, Abia state. IPOB members claim the soldiers in armored tanks had attempted to invade Nnamdi Kanu’s home, a claim the Nigerian Army has since denied. In a statement released last night, the Nigerian Army says that IPOB members prevented some of its officers from passing through the road where Kanu’s house is.
The IPOB members attacked the Army officers with stones and broken bottles. In the process, two officers and a lady were injured. IPOB members claim the soldiers shot one of their members on the leg.
This morning, the leader of the secessionist group led some reporters to his home. In an interview with the reporters, Kanu said countered the claims by the military. According to him, they attempted to drive to his home but were prevented by his members. He also said that there were casualties and that the military took some of the casualties away. Kanu also alleged that the military went to the Federal Medical Center in the state to look for their members who were receiving medical treatment from the gunshot sustained during the attempted invasion. He said the Federal government wants to push his group to war but that he would not succumb to it.
“The Nigerian military came to my village to intimidate, harass innocent civilians who are unarmed. I was sleeping. It was their siren that woke me up from my sleep and I enquired what was happening and I was told that the army was coming to my house. I looked through the window from my bedroom towards the junction and I saw their armored personnel carrier. It drove past and then turned around and came back towards this direction and they started firing at the people who were protesting and asking them why are they coming to this place to harass peaceful people who have done nothing to deserve such humiliation. They started firing indiscriminately. So I was told that a few people injured. I saw two people who were bleeding profusely. I was told there were casualties And as it is their tradition, when they shoot people, they carry their bodies away. We didn’t want to get at those people that was why we prevented them from coming here. Their intention was to ransack my family home and we would not have that” he said 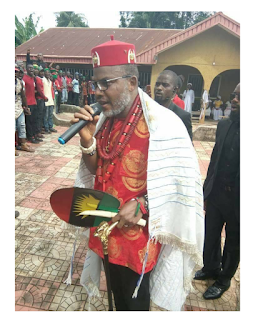