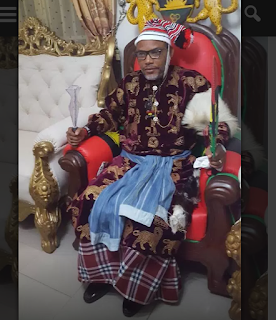 A UK-based civil society organisation, Citizens United for Peace and Stability, CUPS, said on Friday it is gathering facts about the leader of the Indigenous People of Biafra, Nnamdi Kanu, in a bid to ask the UK Government to revoke his British citizenship.
Kanu is a dual citizen of the United Kingdom and Nigeria.
According to the Convener of CUPS, Dr. Idris Ahmed, the move seeking the revocation of Kanu’s British citizenship was connected to alleged acts of “terrorism perpetrated by IPOB, including the recent attacks on Northerners living in the Southeast.”
“Beyond any doubt, IPOB is a terrorist organisation. I have watched so many video clips on Facebook in which Nnamdi Kanu talked about mobilising weapons and financial resources to wage war against the Nigerian State, Ahmed said in a Facebook post.
“The CUPS organisation has started compiling evidence to pass to the British Government to strip Nnamdi Kanu of his UK citizenship.
“Under a new law, over 100 UK citizens who went overseas to commit acts of terrorism or fight for ISIS have been stripped of their citizenship by the Home Secretary (Minister of Internal Affairs).
“Nnamdi Kanu perfectly falls into this category,” he said.
From
Diaspora Reporter

HURIWA condemns Army’s use of torture on IPOB: