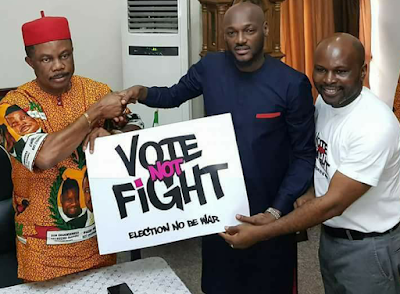 Governor Obiano receives 2face Idibia, Vote not fight Campaign train, reassures on peaceful election in Anambra. By Kenechukwu Ofomah. Governor Willie Obiano earlier today played host to famous Nigerian Music Artiste, Innocent Idibia popularly known as 2face and members of the Vote Not Fight Campaign train at the governor’s Lodge, Amawbia.   The musician who is the founder of 2face Foundation is in the state with the Vote not fight as part of efforts to mobilize Anambra Youths to participate actively in the upcoming governorship election and to shun Pre, during and post election violence. Addressing the group, Governor Obiano maintained that APGA, the party in power in the state is a peaceful party with a slogan that encourages brotherliness and also has a tradition of winning elections fair and square. According to him, the only reason why there will be disaster, is when anybody would want to thwart the people’s collective mandate. 2face in his remarks, commended Governor Obiano for his peaceful stance on the election, adding that their major target is youths because of their vulnerability.