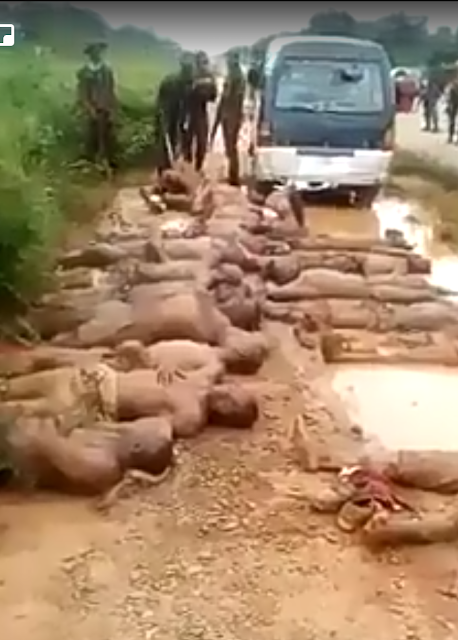 *
* Demands independent judicial inquisition:
A Pro-democracy and non-governmental organization- Human Rights Writers Association of Nigeria(HURIWA) has condemned in absolute terms the reported widespread use of physical torture on the members of the indigenous people of Biafra ( IPOB) by the army in the ongoing operation python dance 2 in the South East of Nigeria.
The Rights group in a statement issued today against the backdrop of trending Audio-video recording on social/online media, showing extensive adoption of torture by the military operatives targeting unarmed members of IPOB, specifically selectively targeting unarmed members of pro-self determination group (IPOB), only for being in possession of alleged memorabilia, flags and other designed items belonging to the Europe registered Indigenous People of Biafra (IPOB), calls the act the worst kind of crime against humanity.
HURIWA in a statement jointly authorized by the National CoordinatorComrade Emmanuel Onwubiko and  Miss Zainab Yusuf the Media Director, said that torture is the greatest crime against humanity particularly if it is systematically and methodically used by the military forces during the course of internal military operation in civilian populated areas as are the cases with the ongoing internal military operations in the South East of Nigeria.
Citing several and multiple statutory provisions of the Local, Municipal and International Human Rights laws, HURIWA has therefore demanded an open, transparent and independent investigation of the use of torture by the army against the Indigenous People of Biafra (IPOB).
Section 34(1) of the 1999 constitution said thus: “(a) no person shall be subjected to torture or to inhuman or degrading treatment; since every individual is entitled to respects for dignity of his person”.
The rights group similarly cited article 7 of the international covenant on civil and political rights which says thus: “no one shall be subjected to torture or to cruel, inhuman or degrading treating or punishment. in particular, no one shall be subjected without his free consent to medical or scientific experimentation.”
Besides, HURIWA affirmed that Article 5 of the Universal Declaration of Human rights (UDHR) says that “no one shall be subjected to torture or to cruel, inhuman or degrading treatment or punishment”.
The group said that the particular video recording which shows several army operatives, forcefully kicking, flogging, pushing violently, waterboarding (soaking) in muddy and dirty water, several members of the (IPOB) who were stripped to their pants by the unprofessional military operatives, is the clearest evidence of crime against humanity which must not be swept under the carpet.
HURIWA is of the opinion that being in possesion of the flag or memorilia of IPOB or indeed any group that is non-violent nor legally declared a terrorist organization is in no way a crime punishable by any legally approved sanctions known to our law books. HURIWA cited examples of some state governments in Nigeria that have their uniquely designed flags and memorabilia such as Osun and wondered why the Army has criminalised the possession of IPOB flag arbitrarily.
HURIWA said, apart from the fact that IPOB is a well known self determination canvassing platform which is registered Europe-wide is also not doing anything that is illegal or unconstitutional, going by the sacred fact that the non-violent pursuit of self determination is recognized under international law and in compliance with Part 1 article 1 of the international covenant on civil and political rights which states thus: “all peoples have rights of self-determination. By virtue of the right they freely determine their political status and pursue their economic, social and cultural development.”
HURIWA has therefore given the federal government three working days notice to convoke an independent investigation into wide-spread use of torture by the army on IPOB members or it will be left with no option but to drag the Nigerian government to International Criminal Court in The Hague Netherlands over crimes against humanity.

Another Psquare Fight? There has been underground gists that once again, all is not well in the Psquare camp