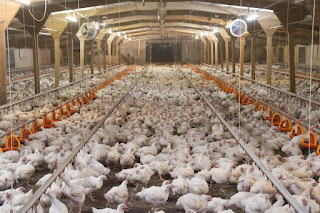 A live chick was placed in a bucket of dead birds. It took an hour to die A chicken producer that supplies Asda, Lidl and Nando’s allegedly breached animal welfare laws after hidden cameras discovered that deformed and ill birds were left to die slowly and painfully. Production has since stopped at the farm near Taunton in Somerset following the investigation by vegan campaign group Animal Equality that was carried out between May and July. The investigation witnessed a worker throwing a live chick in a wheelbarrow of dead and dying birds and leaving it for an hour, before coming back to empty the wheelbarrow into another bin. The worker then took the chick out – assumed to be the same one – and and broke its neck. Workers allegedly kicked birds out of the way and the animal rights group found sheds were overcrowded, with four sheds housing 150,000 birds. Some of the birds were deformed, and often too weak to stand or reach for water or grain. Cambria Farm supplies Faccenda, the second largest chicken company in the UK, and it employs cost-cutting methods that mean a chicken can cost just £3. A chicken will live for about 40 days in such conditions. Many birds die during this time. It is then loaded into a crate and driven by lorry for 140 miles to Faccenda’s slaughterhouse in Northamptonshire. A Faccenda spokesman told The Times that an “external vet” was sent to the farm to investigate workers kicking chickens and approved it, described by the spokesman as “shepherding” birds out of the way. Paul Vaughan-France, owner of the farm, told The Times: “I will take the images as good feedback and will do everything I can to work on every aspect of my husbandry. “I have had an independent vet on site to review my practices and he is satisfied with his findings.” A Nando’s spokesman said: “Animal welfare is very important to us and we source 100 per cent of our chickens from suppliers that meet the UK Red Tractor standards. We were extremely concerned to hear the report that this farm was not meeting our standards and we are conducting a thorough investigation. Nando’s will continue to insist all of our suppliers meet our strict animal welfare expectations, and will only ever source from farms that do.” http://www.independent.co.uk/topic/AnimalRights FROM THE DESK OF ANIMAL RIGHTS WRITERS ASSOCIATION OF NIGERIA