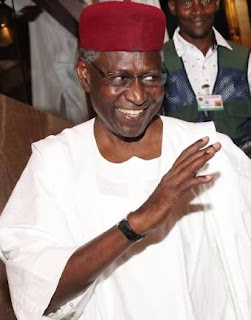 The Presidency has alerted the public on an orchestrated campaign to smear the good name of President Muhammadu Buhari’s Chief of Staff Abba Kyari by a section of the press. Malam Garba Shehu, the President’s Senior Special Assistant on Media and Publicity stated this in a statement issued in Abuja on Sunday.

According to him, some allegations being levelled against the President’s COS are indirectly aimed at rubbishing the successes being recorded by the Buhari administration. He described those behind the campaign as mere blackmailers and extortionists who were bent on creating unnecessary but imaginary division and misunderstanding between President Buhari, Vice-President Yemi Osinbajo and the CoS.

“A careful assessment of some these allegations with a rational mind will show that there is an orchestrated campaign to smear the CoS and indirectly the President. “If I can speculate on the matter, I will say that the problem Malam Abba Kyari has with most people is that he, like the President he serves, will not throw money at people in order to please them.

“As CoS, Malam has refused to keep cash imprest and has turned down a monthly grant of N200 million customarily given to the office. “This is money freely spent because they were not required to account for what they did with it, ’’ he said.

The presidential aide further noted that when the President was away on the medical vacation, the Chief of Staff rallied the Presidency behind Prof. Osinbajo because he knew that his boss, President Buhari expected nothing less.

He said: “As Acting President, Vice President Osinbajo enjoyed the support of the Villa Staff and the entire cabinet. Otherwise he would not have succeeded and earn the praises of the President.

These are just a few among the false and illogical accusations making the CoS larger than life, with the aim of pulling him down. No Chief of Staff including this one can create hurdles for a president and survive the next day. “The roles and duties don’t warrant the kind of falsehood being spread.’’

Shehu therefore dispelled the false notion that some individuals had tried to undermine the Vice President when he acted in the absence of the President.

“Publishing poorly-researched allegations and trying to pass them off as investigative journalism or as news may lead to more newspaper sales or to more clicks on a website; but they will also, in the long run, slow down the growth and development of our country, which right now requires the absolute focus of President Buhari and his carefully-selected team to build the Nigeria of our dreams.

“Unfortunately, this is the path The Punch has chosen and there’s no one to help them but themselves.’’ The presidential spokesman also dismissed as “absolutely nonsensical and absurd’’ to write that in one week of the President’s return, Osinbajo had been sidelined.

He stated that, “quite to the contrary, the Vice President remains the confidante and the closest adviser to the President.”

He noted that Vice President Osinbajo had attended all the President’s engagements all through the week with the exception of two: one, the VP was away to Taraba State and two, the Juma’at Muslim prayer because he is a Christian.

Shehu also dismissed the assertion in some quarters that President Buhari was being manipulated by the certain cabal in the Presidential Villa. “It is difficult to understand what anyone wants to achieve peddling such falsehood that the President, himself a former military general and Head of State and Commander-In-Chief is subject to undue influence and manipulation.

“It is both ridiculous and inconceivable. “As someone who works very closely with President Buhari, I can testify to how my years of experience as a newspaper editor are often put to the test by the sheer thoroughness with which the President edits every single document brought to his desk.

“Every memo, statement, speech, is subject to his intense scrutiny, right down to the placement of commas and full stops. “Therefore, alleging that President Buhari signs memos brought to him by government officials or a so-called cabal without reading them, immediately casts doubts on the credibility of the ubiquitous unnamed sources that the reporters of these articles quote.

“But, of course, the President cannot do everything. He cannot micromanage every task. “That is why he needs close officials, whom he trusts, who will be willing to offend others in the process of ensuring his own safety and wellbeing, and the advancement of his vision for Nigeria.

Shehu advised Journalists with questions to ask concerning the President and the Villa administration to always contact the Special Adviser, Femi Adesina, SSA to the President (Office of the Vice-President) Laolu Akande or himself.

“Where we don’t have your answers, we are ready to obtain as much as we can, the correct responses to your enquiry,’’ he added.