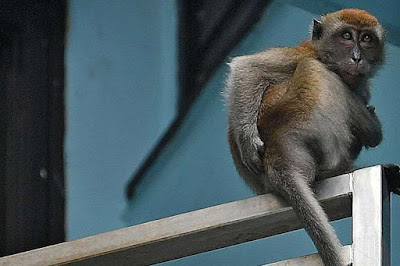 Primate being weaned off human food at Acres rescue centre before its release into the wild
They sought it here, they sought it there, they sought it everywhere.
Now that the elusive Bukit Panjang monkey has been caught, residents are enjoying a respite from the marauding primate.
The female long-tailed macaque has been moved to the Animal Concerns Research and Education Society (Acres) wildlife rescue centre in Choa Chu Kang, where it is being rehabilitated in preparation for its release back into the wild.
The monkey had earlier created a stir in Bukit Panjang.
It is believed to have attacked several residents, and an elderly man needed two surgical procedures after being bitten.
Now named Sugar, it was handed over to Acres by Wildlife Reserves Singapore (WRS) last Wednesday, and has been placed in an enclosure. It is being weaned off human food and fed a diet available in the wild, comprising fruits and leaves.
Contact with people is also minimised.
“She is doing well but she seems a bit distressed because it is a new place,” said Ms Anbarasi Boopal, deputy chief executive at Acres.
Ms Boopal said it is too early to say how long the macaque’s rehabilitation will take, although a previous attempt with another monkey took a month.
Where it will be released will be determined by the National Parks Board at a later date, she added.
Sugar was one of two macaques which had been harassing residents in Segar Road for months, stealing their food and even biting them. While the first mischief-maker was caught in November, Sugar played cat-and-mouse with its captors for 15 days.
It was finally caught last Tuesday, when a team made up of Acres and WRS officers shot it with a dart gun.
Residents are relieved, though some are not letting their guard down.
Mrs Felicia Chua, 62, used to be afraid when she went to work in the morning, worried that the monkey might creep up at any moment.
“I would even have an umbrella, just in case… I’m relieved that it has been caught,” said Mrs Chua, who works in a hotel.
A 60-year-old housewife, who gave her name only as Madam Khoo, attached sticks to her window grilles to make the gaps even smaller, for fear that monkeys would enter her home.
“I don’t think I will remove the sticks yet, just in case another monkey appears,” she said.
Others, however, feel sorry for the animal as they blame its behaviour on humans.
Mr Wong Chui Weng, 59, a retired businessman, said the fault lies with residents who fed it.
“I’ve always left my windows open and no monkey has ever entered. It must have been lured with food and got aggressive when people stopped feeding it,” he said.
Madam Sumathi Govindan, 41, has seen people chasing it with sticks. “It is really the fault of the people… I hope it is able to return to the wild safely,” said the nurse.
Ms Boopal believes Sugar’s behaviour was altered by public feeding and harassment.
“The whole episode could have been prevented if the feeding was stopped early,” she said.
FROM THE DESK OF ANIMAL RIGHTS WRITERS ASSOCIATION OF NIGERIA
http://www.straitstimes.com/singapore/environment/segar-road-monkey-in-wildlife-rehab

LETS SEE WHAT THIS YOUNG GRADUATES HAS TO SAY ABOUT MEN