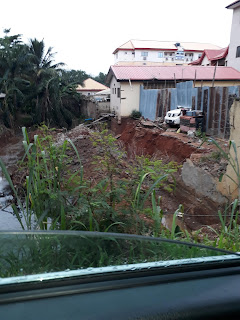 The poor state of roads and infrastructures’ maintenance in the nation’s capital of Abuja has become increasingly worrisome since the rainy season set in.
A drive around the city center would reveal scenarios of terribly neglected township/city roads which immediately set your mind thinking that you are in one of those run down and dysfunctional villages around the 36 states. Asokoro; Maitama;Wuse 11, and Garki Areas are littered with untarred and unattended roads even as the ABUJA authority behave as if those areas aren’t their business. The Minister is reputed to be ineffective and inefficient. 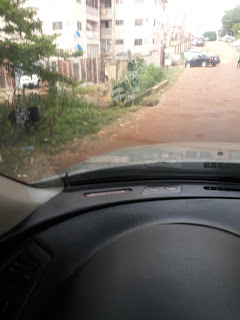 The poor roads network inside and within the metropolitan area council known as Abuja Municupal Area Council is pathetically horrible just at the minister of FCT Alhaji Bello Mohammed has yet to make positive impacts to improve on what he met on ground when he assumed office about two years ago.
Critics say the minister is simply not interested with bequeathing legacies of formidable infrastructures like one or few of his predecessors. They say the FCT minister pays more attention on allocating plots of choice lands to cronies and loyalists of his political family than attend to the arduous task of building and maintaining infrastructures and government offices in tge FCT.
His media advisors believe otherwise but a visit to some of these badly maintained or totally neglected roads will prove that the minister has a lot of convincing to do to show that he is working.
Following the criminal neglect and abandonment of some township roads such as the Ngwa Road in Garki Area three -the link road to  large private schools, hospitals and hospitality industry and adjacent the Our lady Queen of Nigeria Catholic church, has inevitably led to the horrendous consequences of flash floods and erosion which has wreaked havocs around this heavily populated area.
Mind you, on the average there are over 500 pupils frequenting this erosion afflicted road to attend schools around the vicinity.
Human rights writers Association of Nigeria (HURIWA)  sent a team to assess the dilapidated road and what the team saw is short of a full blown disaster which if not tackled by the FCT authority then lives of hundreds of residents would be imperiled and the major road would soon be cut off by the effects of erosion.
Emmanuel Ating had written a paper in which he raised alarm on the fuller imports of floods and erosion and the negative impacts to the lives of citizens.
According to him, the definition of flood is quite difficult, partly because floods are complex phenomena and partly because they are viewed differently by difficult people. For most practical purposes and certainty in popular usage, a meaningful flood definition will incorporate the notion of damage and inundation.
As expected, most flood relate to river floods and the one by Ven- Te -Chow (1956) is not untypical.
Emmanuel Ating recalled that the abovementioned author defined floods as relatively high flow, which overtaxes the natural channel, provided for runoff.
He argued that as it is today, so many stream channels have been artificially improved that the definition by Rostvedtet al (1968) is probably more appropriate. They defined flood as “any high stream flow, which overtops natural or artificial banks of stream.
However, in order to incorporate the rarer coastal as well as the more urban floods a more general definition is needed.
Thus, flood is defined as a body of water rises to overflow land which is not normally submerged. In this context, inundation is explicit and damage is implied in the last three words of the definition. In low-lying, urban areas, three types of rain producing floods are identified viz flash, single event and multiple events floods.
HURIWA observes that this floods and erosion threatening to tear apart Ngwa Road Area 3 Garki has the potential of harming the economic wellbeing of hundreds of thousands of people around the vicinity and threatens the Children attending the imposing Madonna Model School in the area in addition to one of the best hospitals in Abuja located therein within the street.
This is to call on the FCT authority to make hay whilst the sun shines and also for the FCT’s office of the National Emergency Management Agency to step in and provide assistance to train the residents on how to escape the adverse effects of the floods and erosion. A stitch in time saves nine.
*Comrade Emmanuel Onwubiko is National Coordinator of HUMAN RIGHTS WRITERS ASSOCIATION OF NIGERIA (HURIWA).

REASONS MOST WOMEN GO FOR WELL TO DO GUYS