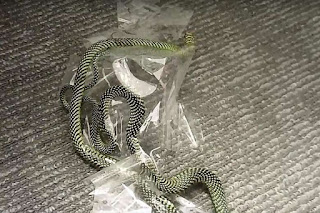 When Acres’ deputy chief executive, Mr Kalai Vanan Balakrishnan, arrived in Buona Vista last week to remove a paradise tree snake from an office, he did not expect to see the 50cm-long snake taped to the carpet with industrial tape.
The adult snake also had a bleeding wound on its back as someone had tried to impale it.
“People are usually afraid of snakes and that’s okay. But by doing this, you’re really asking for trouble – the animal will feel scared and threatened, and things can go wrong,” said Mr Kalai, 31, who was a wildlife rescuer for about four out of his seven years at Acres.
Acres does not keep numbers on cases of wildlife abuse but Mr Kalai, who still helps with rescues when manpower is short, has been noticing more of such incidents
The non-profit organisation receives about 600 calls a month on its 24-hour wildlife rescue hotline, the only one of its kind in Singapore.
While those who call the hotline mostly leave the animals alone, some hurt the animals when they try to pin them down, he said.
This is particularly so for reptiles such as snakes, as well as birds. For every 10 calls related to snakes, Mr Kalai estimated that up to two are abused. Acres once responded to a snake-rescue call from a pre-school only to find a dead young spitting cobra. Someone had stacked at least three cardboard boxes on top of the reptile, which was 30cm to 40cm long, killing it.
Ms Anbarasi Boopal, who is also Acres’ deputy chief executive, said such actions stem from inadequate education on the native wildlife.
“Singapore is creating a lot of greenery and it’s never going to be just butterflies and flowers. There’s going to be lizards, snakes.”
Acres often gets calls about sightings of animals where a rescue is not necessary, she said. Last year, it received about 55 such calls a month, including sightings of small snakes on trees and monitor lizards in community gardens.
To curb this, Acres is ramping up efforts to educate the public on what to do when they encounter some of the common wildlife here.
Earlier this year, for example, it started working closely with and educating property managers of town councils, who are usually the first responders when the public encounter wildlife in a housing estate.
Acres said it hopes the campaign will help reduce misconceptions about Singapore’s wildlife.
FROM THE DESK OF ANIMAL RIGHTS WRITERS ASSOCIATION OF NIGERIA
http://www.straitstimes.com/singapore/environment/dont-hurt-or-kill-that-snake-call-acres

Guy wakes up to a strange noise, finds eight lynxes chilling on his porch

WHY SUPREME COURT MUST REVISIT THE IMO INJUSTICE-: BY HURIWA: