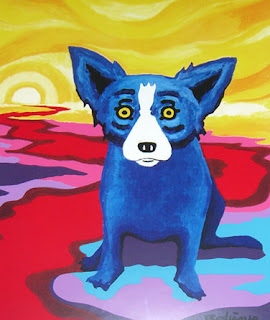 Authorities in Mumbai have shut down a manufacturing company after it was accused of dumping untreated industrial waste and dyes into a local river that resulted in 11 dogs turning blue.
Footage shows the animals roaming the streets with bright blue fur.
“It was shocking to see how the dog’s white fur had turned completely blue,” said Arati Chauhan, head of the Navi Mumbai Animal Protection Cell, told the Times. “We have spotted almost five such dogs here and have asked the pollution control board to act against such industries.”
Chauhan had posted images of the blue dogs on the group’s Facebook page, saying the “pollutants from Taloja Industrial area not only ruining the water bodies affecting humans there but also affecting animals, birds, reptiles”.
The board investigated, shutting down the company on Wednesday after confirming that canines were turning blue due to air and water pollution linked to the plant.
An animal welfare agency managed to capture one of the dogs and wash some of the blue dye off. The group concluded that animal seemed unharmed in all other ways.
The Kasadi River flows through an area with hundreds of factories.
According to data obtained by NGO Watchdog Foundation through right to information, there are 977 chemical, pharmaceutical, engineering and food processing factories in the Taloja industrial area, located outside Mumbai.
FROM THE DESK OF ANIMAL RIGHTS WRITERS ASSOCIATION OF NIGERIA
www.theguardian.com/world/2017/aug/22/the-blue-dogs-of-mumbai-industrial-waste-blamed-for-colourful-canines

A man in Anambra state today, stabbed his father to death over land