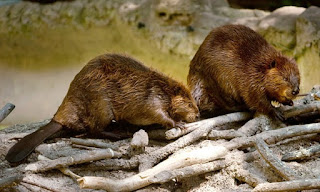 ‘Upon discovering their unusual glands and delightfully thick fur we humans slaughtered them in their millions’ Photograph: Allison Shelley/Getty Images
Here is a beaver-based creation myth. It begins thus. God so loved the world that He seeded it with diligent rodents able to do the hard work of habitat creation – damming streams and creating ponds and lakes in which amphibian larvae thrived, providing food for water beetles and dragonfly nymphs and a host of other invertebrates which fed the fish that early humans consumed. God gave us beavers to make the landscapes upon which we depended – that’s the myth I want you to imagine for the sake of this piece.
It goes on. My creation myth believes that the wetlands that these early creatures created washed away and purified humanity’s poisons. And that these holy creatures, The Beavers, saved us from Biblical floods by slowing the flow rate of sudden aggregations of water. Again and again, The Beavers saved us, but in time, predictably, things changed. We humans came to turn our backs on them. We forgot about Beavers, and God was not pleased about humankind’s insolence.
Like all good creation myths, this one features a gruesome twist. Like the rosy apple that hung from the tree in the Garden of Eden, in my creation myth God put things on beavers to tempt those first people into sinning. He covered them with thick fur that they would desire as clothing. He put their testicles on the inside, rather than the outside, and gave these mystical and elusive gonads properties that may (or may not) have provided medicinal properties. And, lastly, there beneath their tails, God hung a pair of anal glands that produced a smelly substance that the early humans found irresistible. Those early humans made a choice. They couldn’t help themselves. They committed original sin.
Upon discovering their unusual glands and delightfully thick fur we humans slaughtered them in their millions to make top hats and well-known perfumes that still sell today courtesy of a deft hint of anal glands that makes them more appealing than the competition. (Also ice-cream flavouring, but that’s another story). The rest, as they say, is history.
In less than 200 years, the North American beaver went from 90 million to between 10-15 million. In Europe and Asia, just 1,200 beavers remained by 1900. The beavers died, almost totally exterminated. In time, we forgot that they had ever been here.
‘We slaughtered them to make top hats and well-known perfumes.’ Photograph: Alamy Stock Photo
Like all creation myths, mine would become superseded in time by fact. For we discovered there was a better way to describe the patterns in nature that we see around us. We noticed evolution and we determined the mechanism through which it happened: natural selection. And so we must come back to reality and the crux of this Google question, posed above. The big question then, if you will, is this: if it wasn’t for humankind’s benefit, why exactly do beavers build dams?
The simple answer is that beavers build dams to deepen watercourses, so that they can create “lodges” that can be better defended from modern predators including bears, wildcats, otters and other mammalian forebears with whom the beavers shared prehistory. It seems that deep water is particularly important to beavers. Lakes and ponds allow for a kind of floating structure of sticks and branches that can be accessed from a secret hole beneath, a key real-estate feature that reduces the need for terrestrial entrances through which land-based predators can climb. Upon finding shallow watercourses, colonising beavers immediately begin damming, creating canals along which trunks and branches can be dragged along to add to this, their anti-predator superstructure. In these lodges, beavers rear their young and see out winter, safe and sound.
Why and how they hit upon this behaviour is of interest to those who study beavers and their family members, the Castoridae (nearly all of whom are now extinct). It may be an example of a behavioural trait that has “piggy-backed” upon an appetite for bark-gnawing. One imagines that their semi-aquatic ancestors were tree-gnawers that used their spoils for building riverside burrows, with some accidentally hitting upon damming rivers. The truth is we don’t yet know. The creation myth eroded, now a new mystery is being gradually exposed based by those that study comparative anatomy, fossils and DNA.
One thing is clear. Our original sins now washed away by rushing floodwaters, we have an opportunity to bring beavers back into our lives. In recent years, almost every European country has made steps to re-introduce and restore their wild beaver populations. In Scotland, an introduced population of beavers is doing well – indeed, it is now considered a protected native species. There is a good chance that a small breeding population in England may be granted the same status.
After almost killing them off entirely, we may yet redeem ourselves from the sins of our ancestors. How delicious, therefore, that we should free ourselves from damnation by becoming, once more, a dam-nation.
https://www.theguardian.com/commentisfree/2017/aug/16/google-autocomplete-why-beavers-build-dams.
FROM THE DESK OF ANIMAL RIGHTS WRITERS ASSOCIATION OF NIGERIA.

PARIS CLUB: THE MAKING OF A NIGERIAN ‘HERO’ By Emmanuel Onwubiko