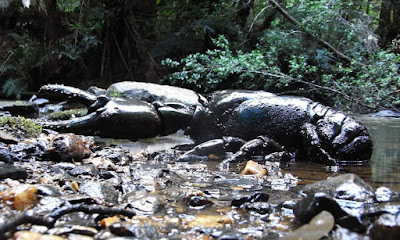 Giant freshwater lobsters are endemic to the north-west of Tasmania and can grow up to 6kg in size. Photograph: Todd Walsh
The federal government has called for more areas of north-west Tasmania to be placed in reserve as part of a conservation plan designed to protect the endangered giant freshwater crayfish.
The crayfish, Astacopsis gouldi, can weigh up to 6kg and live for 60 years. Commonly called the giant freshwater lobster, it is the largest invertebrate in the world and endemic to the cool rivers of northern Tasmania, although habitat restriction and poaching have forced it to retract to areas west of Launceston.
There is no official population count but researcher Todd Walsh, who has been studying the species for 20 years, says the numbers are less than 20% of what they would have been pre-colonisation.
Walsh said locals had a deep affection for the weird creatures, which have been known to turn up on the footpaths of country towns and in the middle of paddocks.
“There was a lady that used to open up a gate every year to let a lobster go down to her dam, and then a few months later it would be back, wanting to go the other way,” he said. “It was just sitting there at the gate.”
The pincers of mature male freshwater crayfish were big enough to wrap around the calf of an adult human, Walsh said, and they had been known to hold – and crush – beer bottles.
“These are supremely impressive animals,” he said. “In the Amazon and the Nile and the Mississippi, there’s nothing without a backbone that’s bigger than these animals.
“It’s an icon species. Everyone’s got a story about lobsters.”
The pincers of mature male freshwater crayfish are big enough to wrap around the calf of an adult human, and the lobsters have been known to hold – and crush – beer bottles. Photograph: Todd Walsh
The species is listed as vulnerable in the federal Environment Protection and Biodiversity Act and under Tasmanian legislation, and endangered on the ICUN Red List of Threatened Species.
A new government recovery plan, signed by the federal and state governments, and released by the ABC, suggests that their numbers could decline further without improved monitoring and greater protection.
Walsh said the biggest threat to the survival of the species was sediment, which is increased by clearfell logging operations.
Sediment is a problem for baby crayfish in particular, because they hide under rocks and logs at the edges of the creek for seven years until they grow large enough to fend for themselves in open water.
Females do not reach breeding age until they are 14, and mate biennially. Although they have between 224 and 1,300 eggs, which they gestate for nine months, few of the hatchlings survive to be independent juveniles.
“The sediment just covers their homes when they are little,” Walsh said. “A small baby lobster is the size of your fingernail, and at seven years old they will still sit on your hand, so they have to hide. The sediment just fills up those holes and then they have got nowhere to hide and they either get eaten or starve.”
He said streamside reserves, which protected vegetation within 30 metres of the creek bank in areas where crayfish were known to reside, did not minimise the impact of sediment washed into the catchment by forestry operations upstream.
According to the recovery plan, there are permanent production forests in 17 of the 22 catchments where the species is known to occur, or is likely to occur.
Twelve of those catchments also have “substantial” areas under protection, mainly through regional reserves.
The recovery plan recommends increasing the areas of lobster habitat under reserve, as well as improving forest management practices to reduce the impact of logging on sediment levels, and greater monitoring of the industry to ensure compliance with strict management prescriptions.
It also recommends greater efforts by the Tasmania police to reduce poaching, including possibly setting cameras at key fishing sites and putting boom gates across forest access roads, which are used by poachers to access lobster-rich creeks.
Under the now defunct Tasmanian Forestry Agreement (TFA), struck by the former Labor government, areas marked as future potential production forests in key lobster catchments would have transitioned into formal reserves within the next 10 years.
But the Hodgman government tore up that agreement and has pledged to open up forestry reserves, which conservationists say could have a devastating impact on the lobster species.
“I’m not Liberal, Labor, or Greens – I’m lobsters,” Walsh said. “But the Labor government to their credit got all of the people to the table. Everyone was OK with it and said we have got a good deal here, and then eight months later the current government comes along and says: ‘nah, bugger it, let’s scrap the lot’.”
The Wilderness Society, which along with the Construction, Forestry, Mining and Energy Union was one of the key architects of the TFA, welcomed the “strong” recovery plan but said it would succeed only if the Tasmanian government followed the recommendations.
“As we have seen in the past, strong plans for the lobster mean nothing if there is not the political will and funding to implement outcomes on the ground,” the society’s campaign director, Vica Bayley, said.
FROM THE DESK OF ANIMAL RIGHTS WRITERS ASSOCIATION OF NIGERIA.
www.theguardian.com/australia-news/2017/aug/19/numbers-shrinking-for-tasmanias-weird-but-much-loved-giant-freshwater-lobster

Emmanuel Ugochukwu Stowed Away In Medview Flight Wheels From Lagos To London Then Back To Lagos.

Artificial chicken grown from cells gets a taste test—but who will regulate it?