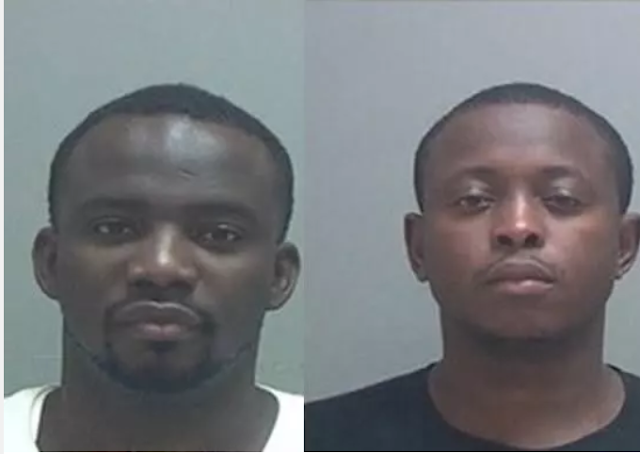 Suspects Temilade Adekunle and Abdulrasheed Yusuf. Photos: KSL
Two Nigerian residents of the United States, Messrs Temilade Adekunle and Abdulrasheed Yusuf, have been arrested on suspicion of forgery, ID theft and communications fraud.
Their victims are American couple, Steve and Andrea Voss. The money allegedly stolen from them was their retirement fund.
According to Mrs. Andrea Voss, one of her lifelong goals was to see different parts of the country, including Hawaii. “That’s been my one dream,” she said. “I really want to go there.”
Andrea and her husband, Steve Voss, are a year and a half into their retirement, local TV station, KSL, reports. 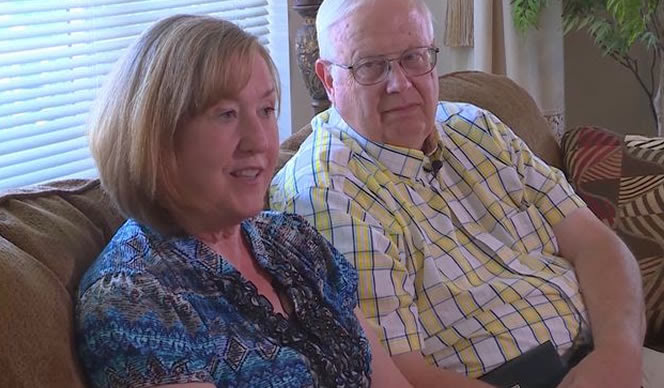 Victims: Steve and Andrea Voss.
Last week, they took a trip to Yellowstone, but when they got back on Friday, August 11, they noticed there was a serious issue with the money they’ve saved for retirement.
“I was curious because the market was doing well this past week and I said, ‘What’s that at?’” Steve Voss said. “And I logged into my account and it’s a zero-dollar balance.”
Added Andrea Voss, “He told me and I was like, ‘You’ve got to be kidding. This can’t happen to me. This happens to other people.’”
Steve Voss says someone had used his personal details to liquidate their account. The check had already gone out.
“The package has been sent but redirected from my home for pickup somewhere else,” he said.
Unified police said the package hadn’t been picked up yet, so they set up a plan to be there when someone came to get it.
Eventually, police said two men showed up to get the package. Police said they followed the two and pulled them over. They said the men had fake out-of-state IDs and a separate 401(k) check from another person.
A 401(k) is a retirement savings plan sponsored by an employer. It lets workers save and invest a piece of their paycheck before taxes are taken out. Taxes aren’t paid until the money is withdrawn from the account.
Unified police detective Shawn Fausett said all credit is due to the Vosses for checking their account.
“In reality, this whole case is hinged upon Mr. Voss checking his balance,” Fausett said. “If he wouldn’t have checked his balance until (Monday) morning at 9 a.m., it would have been too late because the suspects would have been gone.”
Police identified the two suspects as Temilade Adekunle and Abdulrasheed Yusuf.
They arrested the two for investigation of forgery, ID theft and communications fraud.
Police believe the two had flown into Salt Lake City to pick up the checks. Officials believe the men were getting ready to leave town again.
Police are also looking into whether or not other people in the area may have had similar experience.
The total amount between these two checks, police say, was around $120,000.
“That money would have gone to the suspects,” Fausett said, “but the victims actually are losing more because the 401(k)s were cashed out early, and they had penalty taxes and so forth, so the victims themselves are probably out $150,000 if the checks are actually cashed.”
Now, the Vosses are extra careful and they hope others will keep an eye out as well.
“People typically don’t check their 401(k)s until they get a statement in the mail,” Steve Voss said. “Get online and check your 401(k) at least once a week.
Got from punch online newspapers
——–++++++++——————————

IS NIGERIA READY FOR ELECTRONIC VOTING? BY EMMANUEL ONWUBIKO

BOKO HARAM TERRORISTS ARE IN RESURGENCE-HURIWA