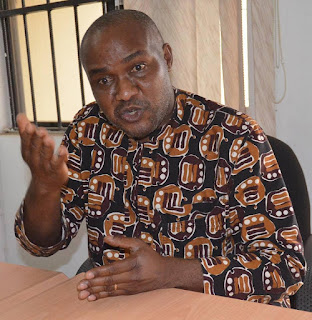 Hate or like him, Mr. Nnamdi Kanu, the irrepressible leader of the self-determination body- indigenous peoples of Biafra (IPOB) has some germane observations on the sickening nature of politics and the lack of good governance in Nigeria.

In one of his comments, he was quoted as saying that the reason his group has embargoed their card carrying members from participating in the November 8th 2017 governorship poll in Anambra State is because those seeking political offices under the extant constitution of Nigeria are basically motivated by the pecuniary benefits they could garner for themselves from those public offices.

Reading through a large volume of political history of Nigeria, a persistent theme present is the disturbing dimension that political corruption has stunted the progress and advancements of Nigeria since over half a century.

Nigeria is a laughing stock in the international community because whereas the Country is enormously endowed with natural resources but also endowed with thieving leadership, the mass of the people are deprived, absolutely poor and hungry.

The irony of starving in the midst of plenty is like someone who is swimming in the pool of water and yet the soap hurts the eyes of such a swimmer.

It is for the colossal mismanagement of resources of the country by political office holders in all administrations that some writers concluded that indeed the massive natural resources that Nigeria are endowed with have become a collective resource curse.

Take for example the case of crude oil resources in which Nigeria is heavily endowed with and for which tons of cash in foreign denominations ought to have accrued from the exportation and marketing internationally of these resources but sadly, very little revenues have actually ended up in the public till whilst a bulk of the cash are stolen. By some estimates from the United Nations office on Drugs and Crimes over $400 billions USD have disappeared into private pockets of politicians over the past four decades.

A cursory analysis of the consequences of the heist of public fund by officials will reveal that the entire society is grossly underdeveloped and the situation of basic infrastructures have become gravely dysfunctional.

In the crude oil rich communities, the environments are devastated by the unorthodox fashions of exploration of these resources and the communities are grossly underdeveloped. The 13 % allocations that the distorted 1999 Constitution concedes to crude oil rich states are substantially pocketed by the state governors.

Let us even begin by taking a look at just the road infrastructure in the South East and the reality that steers us in the face is that of criminal neglect going by the collapsed state of the Federal and state roads.

The other day the zonal office of the anti-graft panel known as Economic and Financial Crimes Commission in the South East briefed the media in Enugu and disclosed that it was beginning the investigation of the massive scale of theft of public fund meant for the road infrastructures in the South East.

By the public admission of this agency of law enforcement, the South East of Nigeria has the worst road infrastructures in the whole of Nigeria.

Infrastructure deficit has always been a major stumbling block to the economic development of the South East of Nigeria which suffered bombardments during a 30-months civil war but wasn’t rebuilt.

So the observations by the EFCC is as factual as it is pathetic.

The EFCC announced that it has invited all contractors awarded various road contracts by the federal government in the South East for interrogation.

Mr. Johnson Babalola, the Enugu head of EFCC said the probe became necessary in view of the deplorable condition of the roads in the zone.

“The deplorable condition of federal roads in the south east has caught our attention. The zone has one of the poorest roads in the country yet, the contracts were awarded”.

“So we have invited the contractors and we are currently inspecting their records. Everything  that surrounds the awards of contracts and execution of the roads will be probed”.

“We solicit for useful information from members of the public in order to get to the root of the investigation we have started”.

The EFCC goofed in their last paragraph by tasking the members of the public to supply them with information on how to tackle failed contracts awarded by government.

I said the EFCC blundered in making this unattainable demand because in Nigeria, politics over the years are played by politicians who view their offices as opportunities for personal aggrandizement and selfish enrichment by hook, or crook.

Besides this politics of fortune in Nigeria is another underlying fact that although Nigeria is one of the few nations in sub-Sahara Africa with the freedom of information Act,  the presidency has consistently undermined the enforcement of the provisions of this act.

The freedom of information Act is a legal tool meant to liberalize the methods of obtaining information from public offices so as to safeguard the principles of transparency and accountability but since its enactment by the National Assembly, government offices are still administered in strict secrecy even as monumental heists of public fund has increased.

By the way, are all the Federal contracts not meant to pass through the forensic vetting of the bureau of the public procurements (BPP) in Abuja which is an agency under the supervision of the presidency just like the EFCC?

The sad thing about the deliberate refusal of politicians in government to operate open government is that even the National and State Assemblies that should serve as the mechanisms for checking the excesses of the executive arm of government is also deeply entrenched and drenched by corruption.

Not too long ago, indeed only yesterday, a former president who had ruled Nigeria as both Military and civilian head of state for over a decade was quoted in the media as characterizing members of the National Assembly as “a bunch of unarmed robbers”.

The statement by the former president Chief Olusegun Obasanjo was countered by the spokespersons of the two chambers of the national assembly who accused him of being corrupt. Obasanjo was accused of bribing the National legislators so they can change the constitutional provisions on term limits to give him a third term but the National Assembly members reportedly collected larger bribes from forces opposed to the sinister agenda.

The political trajectories of Nigeria reveals that most heads of state or presidents have skeletons in their cupboard going by the fact that most of them assume offices as wretched Nigerians but retire into stupendous wealth.

Any wonder that a globally respected writer Mr. Max Siollun had to author a best seller book in which he detailed the leadership failures in Nigeria in what he stylishly called “soldiers of fortune”.

Realistically, you need not read through this beautiful book aforementioned to agree with the author that indeed Nigeria is richly cursed with politicians of fortune whose preoccupation is to rob the commonwealth of the people and reduce the people to paupers.

I say this because all you need to do is to examine the palatial private mansions that these political office holders set up whilst in offices for themselves by helping themselves from the public till.

With the possible exception of General Yakubu Gowon and President Shehu Shagari who still live practically on their generous state pensions, all other former military rulers and retired civilian presidents are living lives of amazing luxuries off the funds of the public.

Even the current president has cost the tax payers billions in the settlements of personal hospital bills in the United Kingdom where he has spent over three months suffering a yet to be disclosed illness.

The other day, the EFCC reportedly confiscated many multibillion Naira housing assets from godson of the immediate past president.

The same EFCC has accused the Zamfara state governor of pilfering billions of cash belonging to his state to set up personal 100 room hotel in Lagos and to buy up a huge housing asset in the United States.

On the last count, virtually all the past governors are accused of diverting huge sums or the other belonging to their people.

In Kogi State, report has it that the governor is building for himself a state of art estate in Okene. In Imo the story is the same.

In his book titled “Soldiers of fortune: Nigerian politics from Buhari to Babangida”, Max Siollun captured the obvious truth that both the civilians and the military are birds of the same feathers in terms of widespread corruption.

His words:  “These clustered networks of personal loyalty blurred the differentiation between the senior officer corps and senior politicians. Both the civilian and military elites became interchangeable”.

In the current administration the cases of abominable corruption has flared up even when the government claims to be fighting corruption. The Presidency has failed to disclose how much of public fund that has gone into treating an unknown ailment afflicting President Muhammadu Buhari.

Nigerians must wake up from slumber and play their part to truly bring about a change of political fortune for the citizens by rejecting the politicians of fortune.