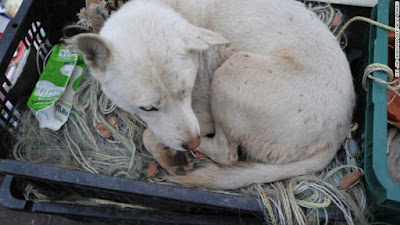 ·         In South Korea abandoned animals have 10 days to be adopted or they are killed
·         Unusually, President Moon has brought rescue pets to the Blue House
Jasper Kim is a Professor at Ewha University in Seoul, Korea, a senior fellow at Melbourne Law School, Chief Executive of the Asia-Pacific Global Research Group, and an attorney. The opinions expressed here are solely his.
(CNN)When South Korea’s new president Moon Jae-in took up residency in the Blue House last month, his choice of pets raised some eyebrows.
Unlike his predecessor, he didn’t exclusively go for pure-bred white Jindo dogs renowned for their devout loyalty and stoic beauty. Instead he chose a rescue dog and cat (named Tory and Jjing-Jjing) — a move hailed by animal rights activists. 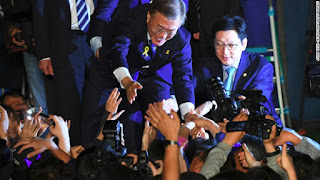 The mere image and civil act of Korea’s new president showing compassion for abandoned and abused rescue animals will be both positive and powerful. South Korea is a modern country, but its progress when it comes to animal welfare lags behind its rapid economic development.
“Tory, by conventional standards, is an ugly dog covered in black hair. I will adopt him as ‘first dog’ in the belief that both humans and animals have the right to be free from prejudice and discrimination,” stated Moon, shortly after being elected.
Many Koreans consider mixed-breed dogs and cats to be “impure,” and many still view animals of all kinds, including dogs and cats, to be “unclean” or “dirty.”
The few prized dogs that do exist in South Korea are typically light or white-colored purebreds — an antiquated notion of purity and cleanliness.
Ten days to be adopted
Such views have had negative ripple effects when it comes to the conditions surrounding abandoned and homeless animals in South Korea.
In 2015, nearly 800,000 animals were abandoned — down from 2010, when the figure reached nearly one million. Under the Animal Protection Act, abandoned animals only have ten days until they must be adopted, or they must be killed humanely.
In 2015, over 42% of shelter animals died or were euthanized, according to the Ministry of Agriculture, Food, and Rural Affairs (MAFRA).
According to the Korea Consumer Agency, only 5.2% were adopted from shelters. Most dogs are sourced from breeders, because pets from shelters are considered unhygienic.
Meanwhile, although the concept of “zero kill” shelters, along with spay and neuter programs to help drive down euthanization rates, is emerging in other regions, the concept has yet to take a strong foothold in South Korea.
South Korea has also received wide criticism, domestically and internationally, for its dog meat industry. Admittedly, the sector is declining, with the younger generation of South Koreans increasingly spurning the practice.
Still, government subsidies and training programs to help transition businesses out of the industry would be highly beneficial for both humans and animals alike in this area.
Stronger laws
While the previous administration did focus on pets as a proclaimed initiative, it was a focus on the pet sector as a potential new economic sector through further deregulation, not a policy focus on improving animal welfare.
In fact, deregulation of the pet and animal industry — which is relatively lightly regulated already — would arguably have led to much worse conditions in terms of pet and animal welfare.
What is needed now are stronger and more modernized laws and enforcement mechanisms to truly protect animal welfare in South Korea.
This can include government support for animal shelters, education awareness programs, funding for spay and neuter programs, and business subsidies to shift out of the dog meat industry.
Such measures — helping both animals and humans alike — will help put South Korea on a greater par with animal welfare programs in the US and Europe.
An opportunity also exists for South Korea, under Moon’s leadership, to be the first nation in the region to pass an animal sentient law, to better protect against puppy mills and other nefarious industries that commit acts of animal cruelty, which much like in Canada and New Zealand, would recognize that “animals are not things, they are sentient beings and have biological needs.”
Mahatma Gandhi famously proclaimed, “The greatness of a nation can be judged by the way its animals are treated.”
President Moon, a vocal animal advocate, now has the opportunity to follow his words with action in the form of passing animal welfare policies.
A great nation must not be defined as merely being a rich nation, but a compassionate nation.
FROM THE DESK OF ANIMAL RIGHTS WRITERS ASSOCIATION OF NIGERIA.
http://edition.cnn.com/2017/06/23/opinions/south-korea-dogs-animal-welfare/index.html