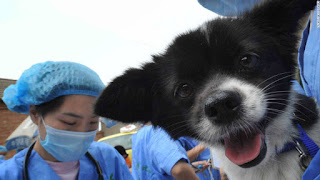 ·         Nearly 800 dogs were rescued by a Chinese animal protection group
·         The caged dogs were headed to slaughter for dog meat restaurants
·         Dog meat is a popular dish in certain regions of China, but now under attack
·         In April 520 dogs were saved from dinner table by Chinese animal-rights activists
Nearly 800 dogs were rescued by a Chinese animal protection group last Saturday night in the city of Zigong, in southwest Sichuan province.
The Qiming Center, an animal-rights protection group in Sichuan, pulled off the rescue. Last Friday night, a volunteer tipped off the group that hundreds of caged dogs were being loaded onto trucks in Zigong and headed to various restaurants in Southern Guangxi province. The group dispatched a team of five to block the dog-trader while they posted microblogs online calling for help from animal-loving citizens.
After a standoff and negotiation, the group agreed to pay the dog trader 83,000 yuan ($13,000) to secure the caged dogs’ freedom, said Qiming president Qiao Wei.
“It’s a compromise we took in an effort to let the dogs free—they are visibly suffering for being packed in small cages with very limited space. We spent hours negotiating with the trader,” Qiao told CNN in a phone interview. “Finally with the help of local government he was willing to hand over the dogs in exchange for 83,000 yuan—60,000 for personal compensation, another 20,000 for cages that we lack.”
Qiming volunteers are now helping settle down the dogs, according to state-run media.
Dog meat has long been a popular dish in certain regions of China. But over time this cultural and culinary tradition is getting more and more unpopular, as international and Chinese animal protection organizations increase pressure against the dog meat trade.
Most dogs rescued Saturday were severely dehydrated. Rescuers photographed and registered the dogs before tending to their health. “It’s a costly work but workers at the center are trying their best to take care of the dogs. Since their arrival, only one dog has died due to respiration system failure,” Qiao told CNN
Ms Teng, a Qiming Center employee, said four full-time staff have been working round the clock. On the center’s official blog, the group frequently updates the dogs’ latest conditions and solicits donations or voluntary assistance from animal lovers.
“Some dogs were stolen, and now their owners come to us to take back their pets. Many would leave with a certain amount of money as appreciation for our work,” Teng told CNN. “Once we’ve finished the health check up procedures, we’ll start helping the dogs find new homes.”
Teng says through the rescue she and her fellow volunteers hope to send the general public one message: “No trading, no killing.” Meanwhile, dog trading remains rife in certain regions in China due to lack of a national law on animal welfare and protection.
“A major part of our work is proposing drafts of laws and regulations under which the government can effectively punish this kind of behavior,” Qiao added. “Now we can only tackle the traders one at a time, and can hardly tell whether they’ll go back to the business again.”
In April 520 dogs were saved from dinner table by Chinese animal-rights activists who stopped a truck carrying them in cages on a highway near Beijing. A 15-hour standoff between volunteers and the trader caused a temporary shut-down of nearby exits, until an agreement was reached. The truck driver let the dogs free for 115,000 yuan. The incident stirred online discussions about how far activists should go in protecting animal rights—a concept still under debate in China.
FROM THE DESK OF ANIMAL RIGHTS WRITERS ASSOCIATION OF NIGERIA.
http://edition.cnn.com/2011/10/20/world/asia/china-dog-meat-rescue/index.html

Latest pictures of the president as he welcomed Alhaji lai Mohammed, Femi Adesina and others

BIAFRA @ 50: THE RESURGENCE OF PEOPLE’S POWER BY EMMANUEL ONWUBIKO