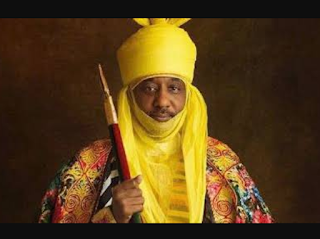 Emir of Kano, Muhammadu Sanusi II, has declared that ,the war against corruption launched by the present administration under President Muhammadu Buhari, can never be won unless there are appropriate sanctions for offenders, and monitoring of corrupt cases by the forth estate of the realm, the media.
Sanusi specifically highlighted lack of discipline, sanctions, monitoring and evaluation of corrupt cases, as the four major problems aiding high level of corruption in Nigeria, and other developing countries in Africa and Asia, in general.
The Monarch, who was represented by the Sarkin Shanun Kano, Alhaji Shehu Mohammed, made these declarations on Wednesday, while speaking at the opening of the “International Conference on Tax Havens and the Developing World: The Global Dimension”, organised by Centre for General Studies, in conjunction with the office of International Programmes, University of Ibadan.
Sanusi, who regretted that it is unfortunate that most companies and individuals who are supposed to pay tax in developing countries in Africa and Asia, hide under the guise of tax heaven to avoid tax payment, informed that most Nigerians quote laws to disobey the laws, at the expense of socio-economic development of the country.
He said: “Most Nigerians do want to pay tax, most Nigerians use laws to disobey the law. Most individuals and companies in Africa and Asia, prefer to take their money to tax heaven, to avoid payment of taxes.
He however, said that corruption is the biggest problem encouraging tax heaven to thrive, as he remarked that most companies and individuals hide under the guise of tax heaven, to avoid tax payment.
“Corruption is the biggest problem that is encouraging tax heaven.
The Monarch then maintained that the war against corruption can be won just within six months, if the government can instill discipline among the citizens, and provide appropriate sanctions for the offenders.
Sanusi however, tasked Journalists to do follow-up to stories of corrupt cases, after they have been reported in the media.
He said Journalists can do monitoring and evaluate of corrupt cases, under the Economic and Financial Crimes Commission, EFCC, as ways of taming corruption.
“There are four major problems that are aiding corruption in Nigeria. One is lack of discipline, the second one is lack of sanctions, the third is lack of monitoring, and the forth is evaluation.
“Lack of discipline is paramount in this country, if we tell our people to be disciplined, it is the first way to discourage corruption
“Lack of sanctions. I know the EFCC man that is here, they are working, they are fine Policemen, who are good in forensic analysis, but if sanctions can be where they should be, I can tell you that in six months, we can fight corruption.
“Lack of monitoring and evaluation of corrupt cases, the Press are not monitoring corrupt cases. I wish the Press can keep their diaries, and remind the EFCC of all the corruption cases. There is no monitoring of the cases.
“I want to suggest this to the Conference, and I believe this is what the Conference will address”.

You can now buy Free Range milk in over 360 Asda Stores nationwide!