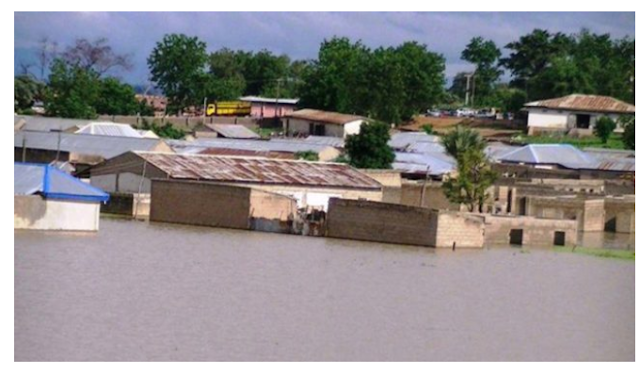 Heavy flooding has severely ravaged at least 46 communities in Abia, killing two children, an official of the State Emergency Management Agency (SEMA) has said.
Mr Sunny Jackson, the Head, Planning, Forecasting and Operations of the agency, made this known in an interview with the News Agency of Nigeria (NAN) in Umuahia on Monday.
Jackson said that the children drowned when flood submerged their home in Akoli Ohazu Autonomous Community in Aba South Local Government Area (LGA) sometime in July.
He said that SEMA gathered that the mother of the deceased was busy trying to salvage her property when the flood surged into her house and drowned the children.
Jackson further said that the 46 affected communities cut across 13 local government areas of the state and that Aba South Local Government area topped the list with 11 communities.
He said that Aba North came second, followed by Obingwa, Osisioma and Ugwunagbo council areas.
“Some residents of the affected communities can no longer access their homes because their houses had been completely submerged.
“Some of the communities have been cut off from their neighbours because flood has washed off their roads.”
He said that the situation in Abia confirmed the predictions by the Nigerian Meteorological Agency (NiMeT) and Nigeria Hydrological Services Agency about flooding this year.
According to him, Abia is one of the states that received alert about the impending flooding in the country this year.
“This is why I consider it a pure fallacy for anyone to say that there is no flooding in Abia.”
Jackson expressed delight that succour would soon come to the affected communities.
He said that Abia was among the 16 states slated to benefit from the N1.6 billion Federal Government Flood Intervention Fund.
The SEMA official said that the agency was committed to disaster-risk management in the state but expressed regret that the agency’s operations were adversely affected by shortage of personnel and logistics.
According to him, the agency is in dire need of equipment such as Geographical Positioning System, digital cameras, trucks and ambulances for efficient
service delivery.
Jackson described flooding as a natural disaster but noted that it could be escalated or checked through human actions or inactions.
“Building on flood planes and waterways, deforestation, over-grazing, improper channelling of water, blocking of drains and flood channels are capable of triggering the disaster.”
He said that to checking the disaster required re-afforestation, desilting of the drains and prohibiting the erection of structures on waterways, among other measures.
From (Guardian Nigeria)