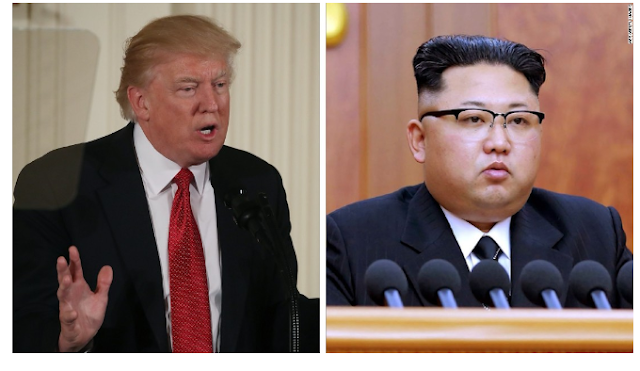 U.S President Donald Trump has issued a ‘new red line’ concerning the ongoing war rhetoric between the White House and Pyongyang, saying North Korea’s supreme leader Kim Jong-Un will not get away with his threats towards the United States and that if he makes one more threat towards the United States, Guam or allies of the United States, he’ll regret it fast.
The warning came a few hours after an early morning tweet from the U.S president saying US military options were “locked and loaded” for use if Pyongyang “acted unwisely”- further creating more tensions among citizens within the Korean peninsula.
North Korean warned it will launch four missiles at the waters around US Pacific territory of Guam if Trump continues to threaten the safety of the North Korean government to which Trump responded by saying the U.S will respond with ‘fear and fury’.
Trump stood by his words when asked about them at his golf resort in New Jersey on Friday evening.
“I hope they are going to fully understand the gravity of what I said, and what I said is what I mean,” Trump said. “Those words are very, very easy to understand.”
“If somebody else uttered the exact same words that I uttered, they’d say: ‘What a great statement, what a wonderful statement,’” Trump said. “But I will tell you, we have tens of millions of people in this country that are so happy with what I am saying, because they say, ‘Finally, we have a president that’s sticking up for our nation and frankly, sticking up for our friends and our allies.’”
He then issued an ultimatum to Kim Jong-un himself. “This man will not get away with what he’s doing,” he said. “If he utters one threat in form of overt threat – which, by the way, he’s been uttering for years – or if he does anything in respect to Guam or anyplace else that’s an American territory or an American ally, he will truly regret it.”
“We want to talk about a country that has misbehaved for many many years – decades, actually – through numerous administrations, and they didn’t want to take on the issue and I had no choice but to take it on, and I’m taking it on. And we’ll either be very, very successful quickly or we’re going to be very, very successful in a different way, quickly.”