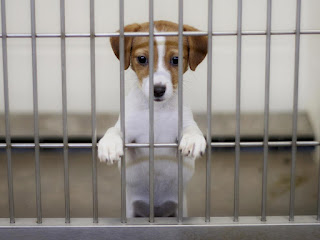 The Agriculture Department abruptly removed all animal welfare reports from its website in February, sparking public outcry, denouncements from Congress and a lawsuit. Six months later, we’re no closer to understanding exactly why the reports were taken down or when all might be restored.
But recently published information shows one result of the records sweep: The agency has been inundated with Freedom of Information Act requests for the documents, which include inspection and enforcement records about the treatment of animals at more than 10,000 dog-breeding operations, research labs, roadside zoos and other facilities.
The USDA has cited privacy concerns and litigation for its decision to remove the online records. They were regularly accessed by animal protection advocates, who used them to monitor government enforcement of animal welfare laws, as well as by pet vendors, journalists and researchers. The agency says it has since restored thousands of the inspection and annual reports to the website, but many more — including all inspections of dog breeders and show-horse events regulated by the Horse Protection Act — remain available only through a FOIA request, which can take months or years to be approved.
And according to newly released logs, there has been a dramatic increase in those FOIA requests. Between Feb. 3, the date the records were removed, and May 15, the agency received 751 requests. The total was more than double the number received during the same period in 2016.
That’s according to an analysis by Delcianna Winders, a vice president with the PETA Foundation, who received the logs in late July — via a FOIA request. The agency posted the logs for January through April last week. Before the February records purge, the agency posted such logs on a monthly basis.
Winders said the “astounding” increase demonstrates a “tremendous public interest” in the documents.
“This burgeoning backlog is entirely attributable to the fact that they took these records down,” she said, adding that, by her calculation, more than 70 percent of the requests involved records that would have been available online before February.
Tanya Espinosa, a spokeswoman for USDA’s Animal and Plant Health Inspection Service, said Wednesday that the division now has 1,596 open FOIA requests. The service “continues to work as expeditiously as possible to search for the requested records and to process and release them according to requirements of the FOIA statute,” she said.
Winders said the volume of requests bolsters a lawsuit against the department by PETA and other animal protection groups, which argue that the agency is legally required to proactively post records that are frequently requested or are likely to be. USDA has filed a motion to dismiss the suit, saying that it misinterprets federal law and that the online publication of such records was previously done by choice, in part to reduce the FOIA backlog.
The logs show that many requests between February and mid-May were made by animal protection activists and journalists, some of whom sought reports written since February or information on the reason for the records removal. But they also include a request for breeder inspection reports from a man who said he plans to buy a dog and wanted “to know that my money will not support animals housed in inhumane conditions”; a dog seller who said she needed to ensure that her suppliers “have no write-ups”; and a New Jersey state consumer agency seeking information on one specific breeder.
The USDA has said its decision is not permanent, and Espinosa said documents not yet reposted remain under review. Activists say that although the removal was made under the Trump administration, the transparency backtrack began last fall during the Obama administration, when the agency stopped posting enforcement records online.
The action has been criticized on Capitol Hill, where bipartisan groups in the Senate and the House have introduced legislation that would require the online posting of all Animal Welfare Act and Horse Protection Act inspection reports and would block violators from getting tax benefits. In addition, the House appropriations bill approved last month demands that the USDA “promptly finish reviewing the information on its website, restore all legally permissible records previously removed, and resume posting on the USDA website.”
“This situation is absurd,” Rep. Earl Blumenauer (D-Ore.), a sponsor of the House legislation, said in a statement. “Why would USDA protect animal abusers? There is no excuse not to give the public this information. It’s the agency’s job to protect animals.”
Winders, a lawyer who is a plaintiff in the PETA-led lawsuit, said the lack of easy access to the records hampers the group’s efforts to identify animals in abusive situations and has “completely stymied” her research for a law review article on recidivism by violators. Industries regulated by the USDA, including groups representing zoos and research labs, also have been critical.
Joe Watson, CEO of Petland, a chain that sells puppies at about 80 stores nationwide and requires commercial breeders to have at least two years of clean USDA inspection records, said agency officials have assured him that inspections continue. But his company now must get reports directly from breeders instead of from the online database, he said.
“While we applaud government efforts to ensure the privacy of certain breeder information, we continue to encourage USDA to find a solution that balances the privacy needs of breeders, while providing relevant inspection information to the general public,” Watson said in an email. “The past six months have created an extra burden for our Petland operators; however, we hope an ultimate solution to inspection report access is soon forthcoming.”
FROM THE DESK OF ANIMAL RIGHTS WRITERS ASSOCIATION OF NIGERIA.
https://www.washingtonpost.com/news/animalia/wp/2017/08/10/people-who-care-about-animal-welfare-are-demanding-information-from-usda/?utm_term=.c7ef119c9a78

POLITICIANS OF FORTUNE IN NIGERIA BY EMMANUEL ONWUBIKO

PARIS CLUB: THE MAKING OF A NIGERIAN ‘HERO’ By Emmanuel Onwubiko