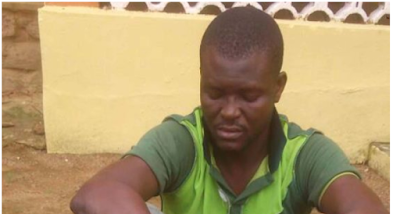 A thirty-five-year-old man identified as Bakare Olalekan, was yesterday paraded before newsmen at the Ogun state police command for being in possession of a human heart. When he was interviewed by newsmen, Olalekan said he purchased the human heart for N10,000 from his friend he simply identified as Oye and that he was meant to use the body part for a “good luck charm” he was preparing.
“He (Oye) later sold three human hearts to me and he used one of them to prepare the charm for me. I later sold the remaining two to a suspect who is also being detained.”
The state police commissioner for police,  Ahmed Illiyasu, who paraded the suspect before newsmen, said investigations by the police have shown that Olalekan was part of a four-man syndicate that killed a 16-year-old girl, Olayinka Adebayo, last year August. The police boss says the suspect would soon be charged to court.