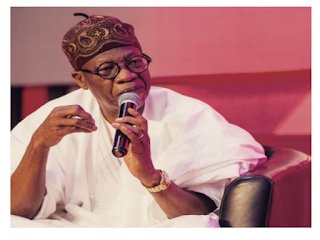 Internet and Social media does not forget things. Nigeria’s Minister of Information and Culture, Lai Mohammed in 2009, as the then Publicity Secretary of the Action Congress said that the Federal Government should update Nigerians on the state of health of the late Umar Musa Yaradua. Now as it is the case with him as the Minister of Information, and whose President’s health is questionable and fuelling a lot of rumours, has Minister Lai Mohammed spoken on President Mohammadu Buhari’s state of health?
Minister of Information, Lai Mohammed
”The Action Congress (AC) has renewed its call on the Federal Government to give Nigerians a daily update on the health of President Umaru Yar’Adua to stem the growing rumours surrounding his state of health. In a statement issued in Lagos on Sunday by its National Publicity Secretary, Alhaji Lai Mohammed, the party said the current situation whereby ministers and aides of the President give out uncoordinated information on his health, is doing more harm than good.
“It is clear to discerning Nigerians that those pretending to speak authoritatively on the President’s health are deceiving the public, since they are neither well informed on the issue nor competent to speak on it.
“Therefore, a daily briefing by the Minister of Information, based on authentic details provided by the Presidential doctors, should start forthwith. As we have said many times, the health of the President, as a public figure can no longer be of interest only to his family and friends. Nigerians have a right to know, AC said. ”
The party also called on the Federal Executive Council, FEC, the only body constitutionally empowered to start the process of determining whether or not the President can continue in office on the basis of his health, to rise above mundane considerations and put the national interest first.

oh my God, flavour has done a great job here