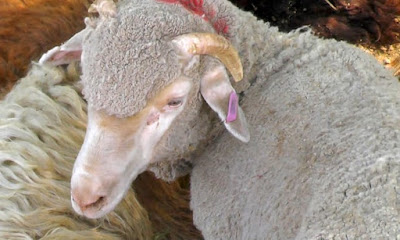 Three thousand sheep died on a voyage from Fremantle to Doha last year. Photograph: Animals Austrlia
Western Australia is seeking to remove constitutional barriers to punishing live exporters over animal welfare concerns after 3,000 sheep died on a single voyage to the Middle East last year.
The animals died from heat stress on Al Messilah, a converted car carrier that left Fremantle bound for Doha on 3 July 2016. It was the largest single sheep mortality event on an Australian live export ship in 2016.
According to a report of the incident written for the federal Department of Agriculture by Perth-based exporters Emanuel, there were so many dead sheep that it was difficult to manage the bodies.
The report was released under freedom of information laws to activist group Vets Against Live Export and published in the West Australian.
“While there a v (sic) difficult situation to organise the collection of bodies on a fully loaded ship where the usual collection places would mean blocking discharge routes,” it said. “Marking bodies was ineffective as they were decomposing rapidly in the heat making marks difficult to distinguish and keep track of.”
The WA agriculture minister, Alannah MacTiernan, said the incident prompted the McGowan government to examine the state’s jurisdiction to prosecute animal welfare concerns on live export ships, which are managed by federal regulation and therefore thought to be untouchable by state laws under section 1.09 of the constitution. The section rules that state laws which are inconsistent with federal laws are invalid.
The precedent with regard to live export cases was set in WA in 2008, when a magistrate found the same exporter, Emanuel, guilty of one count of animal cruelty under the Animal Welfare Act WA but acquitted the company because the legislation was inconsistent with federal laws and therefore invalid under section 109.
MacTiernan said she had asked for legal advice to see if that rule still applied when federal control of the live export system was primarily through the Exporter Supply Chain Assurance System and national standards established through regulation, not legislation.
“We have asked the solicitor general for advice on a complex matter involving constitutional issues, so we expect this may take some weeks,” she said in a statement to Guardian Australia. “We will await advice from the solicitor general as to whether the State Animal Welfare Act can prevail over commonwealth guidelines.”
MacTiernan said the federal government was “shirking its responsibilities” to enforce humane animal welfare standards on live export ships.
“Incidents like this trash public confidence in our entire livestock sector,” she said. “The federal government’s head-in-the-sand approach, where no penalties are imposed and there is no independent oversight of live exports, leads to the kind of public backlash that threatens the viability of the industry.
“We need to seriously look at the Productivity Commission’s recommendation of an independent, science-based statutory body to oversee animal welfare standards to restore public confidence in the system. Consumers need to be able to trust Australian standards.”
MacTiernan said she was not seeking to end the practice of live export, which she said was an “important part” of WA’s agriculture industry.
The federal agriculture department did investigate mortalities on the MV Al Messilah, prompted by rules that require exporters to report all incidents where more than 2% of livestock on board have died.
According to figures released to parliament, 3,027 of the 69,322 sheep had died on the 22-day voyage, a mortality rate of 4.36%. Of the 1.7 million sheep exported live from Australia in 2016, 15,591 died before reaching their destination, an industry-wide mortality rate of 0.86%.
A response by the department to the investigation, also released to parliament, said the predominant cause of death was heat stress caused by several days of “extreme humidity” as the ship travelled through the Gulf to Doha Port at Qatar.
The department told the exporter to “amend their comprehensive heat stress management plan for the next consignment to the Middle East” by reducing their stocking density, installing industrial fans to ventilate the lower decks, and looking at what other weather forecasting information is available.
Emanuel’s next shipment to the Middle East, the department noted, had a reduced mortality rate of 1.37%.
In a statement, the Vets Against Live Export spokeswoman, Dr Sue Foster, said the Al Messilah was already 10% below its legal capacity when it left Fremantle on 3 July, suggesting the current national standards for live export were “insufficient to prevent suffering and death from heat stress”.
“The department’s own records including shipboard performance and high mortality voyage reports all identify the significantly increased risk of transporting animals during the Middle East summer,” she said. “Increased space does not mitigate the issue. This is unacceptable, these voyages should cease immediately.”
The department last month called for applications from experts to join an advisory committee to review Australia’s live export standards.
FROM THE DESK OF ANIMAL RIGHTS WRITERS ASSOCIATION OF NIGERIA.
https://www.theguardian.com/australia-news/2017/aug/10/wa-seeks-powers-to-prosecute-live-exporters-after-3000-sheep-die-on-ship

2 women fined, banned from owning pets after abandoning their dogs