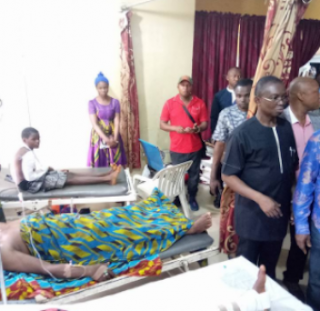 The Public Relations officer of the Nigeria Police force, Jimoh Moshood, says three persons have been arrested and are currently in detention over the massacre at the St Phillips Catholic Church in Ozubulu in Anambra state last Sunday. Jimoh who was a guest on Channels TV this morning, said the persons arrested have a direct connection with those who perpetrated the crime. According to him, the police is currently working undercover to arrest some of the perpetrators of the attack that are currently not in Nigeria.
“The update is that we have three suspects in detention and we have more leads to get to the perpetrators of this crime and very soon, Nigerians would see that we have succeeded in ensuring that we arrest the actual culprit in this crime. Very soon we are going to have a breakthrough. Those suspects that we have arrested are not just people that we picked on. These are people that have played one role or the other in committing that offense and we would get to the root of this. Investigation is ongoing around the church premises while the church has deemed it in their wisdom to use an alternative building around the church to conduct mass for the deceased. The IGP has sympathized with the government and people of Anambra state and has put in all the seriousness needed. Outside of that, we are working undercover to ensure everyone involved, including those who are not in Nigeria presently, are arrested and prosecuted” he said
Recall that the attack is believed to have been caused by a drug deal that went south between two drug barons that are from Anambra state but reside in South Africa

People who care about animal welfare are demanding information from USDA