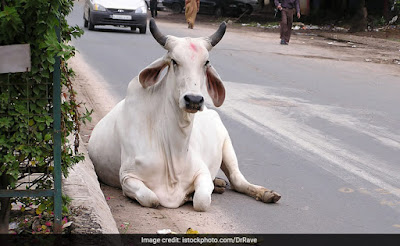 ROHTAK:  The Haryana government is all set to launch a campaign to tag stray cattle and send them to ‘gaushalas’ or cow shelters before August 15, Chief Minister Manohar Lal Khattar said today. The campaign also aims at tagging domestic animals to prevent people from leaving them on roads.

Mr Khattar directed officers of the animal husbandry and dairying department to launch the special campaign to tag stray cattle as well as those reared by people in order to prevent the animals from wandering on the roads.

“Fine would be imposed on anyone leaving behind the cattle on roads,” he said. The Haryana chief minister was here to redress grievances of people regarding stray cattle, delay in power and water connections etc.

On a complaint regarding delay in issuance of water and power connections, the BJP leader stated that officers concerned should not delay in issuing the connections as these were basic services.

“Delay in issuing power connections increase the possibility of theft of electricity,” he said.

Mr Khattar said efforts were being made to provide 24-hour power supply to those who pay their electricity bills regularly.

He said grants were being given to promote renewable energy in the state. The chief minister also directed the Meham Sub Divisional Magistrate (SDM) to ensure that meat and liquor shops were not opened in areas close to temples.
FROM THE DESK OF ANIMAL RIGHTS WRITERS ASSOCIATION OF NIGERIA.
http://www.ndtv.com/india-news/haryana-government-to-tag-stray-cattle-by-august-15-1728058