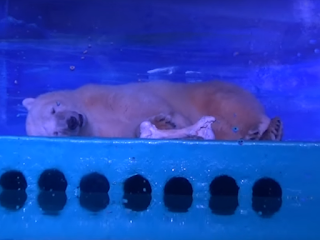 Offer follows outrage at conditions of enclosure at mall in Guangzhou city
A British wildlife park has confirmed it has offered a new home to a polar bear living in cramped conditions in a mall in China.
Yorkshire Wildlife Park in Doncaster said it has approached the authorities in charge of the bear which is kept in public view at the Grandview Centre shopping mall in China’s Guangzhou city.
The bear, whose name is Pizza, made headlines earlier this year following a campaign and a petition to free him from the mall.
The protest at his enclosure followed videos showing the bear slumping on the floor behind the glass of the enclosure.
Animals Asia said the owners at the Ocean Theme Park at the mall had made “no attempt to create an environment that would meet the needs of any living bear”, when it first opened in January.
The charity’s welfare director Dave Neale told the BBC: “We would be delighted to see Pizza end up at Yorkshire Wildlife Park.
“There can be a happy ending – Pizza would not only enjoy incredible facilities, he would also be part of a community of bears.”
The Yorkshire Wild Life Park is home to a purpose-built  environment for polar bears and currently has four animals living there.
FROM THE DESK OF ANIMAL RIGHTS WRITERS ASSOCIATION OF NIGERIA.
http://www.independent.co.uk/news/world/asia/worlds-saddest-polar-bear-pizza-new-home-yorkshire-china-mall-a7316416.html

Emmanuel Ugochukwu Stowed Away In Medview Flight Wheels From Lagos To London Then Back To Lagos.