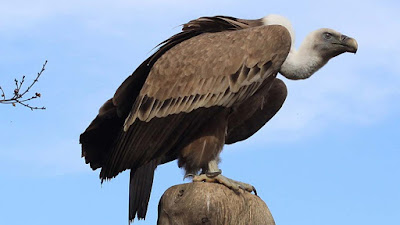 Africa’s largest and most recognisable birds of prey – vultures – are going into extinction as a result of its use for ritual purposes, according to the latest assessment in Ondo, Osun and Ogun states.
The decline in vultures’ population is becoming alarming, as approximately 500 tonnes are trafficked monthly ending up as derivatives used in traditional medicine. The bird is widely sourced from Northern Nigeria to meet the demands in Southwest Nigeria for traditional medicinal purposes.
There are about 23 species of vultures worldwide, 16 of the species are in developed countries and seven are in the developing countries, while seven of those species are found in Nigeria.
The South West region has two species described as palmnut vulture (gypohierax angiogenesis) and the hooded vulture (necrosyrtes monachus), but lamented that they are no longer found in places like Ikare, Kabba and Uyo.
Conservationist at the Nigerian Conservation Foundation (NCF) raised the alarm last week at a stakeholders’ workshop on wildlife trafficking in Akure, themed: “Save Africa’s Vulture.”
The NCF Director-General, Mr. Adeniyi Karunwi, said that the extinction of vultures and other wildlife in the country would lead to more endemic outbreaks, describing them as special creatures for the survival of mankind.
Karunwi said NCF and other organizations in Africa, with support from BirdLife International, have been working to advocate the protection of vulture and other endangered wildlife that are commonly traded at local and international markets.
The Director urged that the belief system must be able to accommodate a new thinking that not only recognises but also preserves the right of the African vulture species to live.
The vultures’ conservation, he said, is highly imperative so as not to jeopardize the future of the unborn generations, pleading for a sustainable pathway to reduce and ultimately combat vulture decline.
“NCF is not asking too much from us, but a determination and commitment to change our lifestyle particularly the need to see vultures as environmental sanitation agents or cleaners and that human survival depends on them.”
Prof. George Ogunjemite of the Department of Ecotourism and Wildlife Management, Federal University of Technology Akure (FUTA), said “all over the world, vultures serve as nature’s vital clean up crew, resist toughest bacteria, viruses and prevent spread of diseases and epidemic caused by animal corpses.”
Prof. Ogunjemite listed habitat loss, poisoning, hunting, large market for traditional medicine, poachers, effects of poisoned predators by cattle rearers are major threats against the conservation of cultures.
He, however, disclosed that the decline of vulture in many parts of the country due to the negative belief and attitude of the people, especially poachers, has led to the infestation of more grave diggers that are able to spread virulent diseases like Ebola, cholera, etc.
“The moment wildlife is destroyed, mankind too will be destroyed. They have biodiversity linkage. We have to let people know that as it is happening that as it is happening to primates, it is happening to other animals too,” he said.
He warned that their extinction will consequently spread deadly diseases, parasites, lead to emergence of new and more deadly epidemic, increased environmental pollutants, loss of historical past and personality.
The stakeholders, collectively, blamed government for poor legislation on the conservation of wildlife, noting that there is failure in the effective implementation of extant laws to protect them.
“In a communique, they urged government at all levels to make effective legislations for the conservation of wildlife and ensure their enforcement with stiffer penalties for violators.
“We urge the government to step up efforts at promoting conducive habitat and environmental protection; especially on research and continuation of policies.
“We ask all relevant government agencies like National Environmental Standards and Regulations Enforcement Agency (NESREA) and other law enforcement agencies for effective synergy to mitigate trafficking in wildlife resources.”
The stakeholders also demanded advocacy, enlightenment, education and sensitization on the dangers of wildlife (vulture) decline, stressing the importance of their conservation; importantly in local dialects.
“We urge, as a matter of urgency, that the curriculum should be revised to include relevant aspects of wildlife preservation and conservation in the educational syllabi from elementary to tertiary institutions.
“We demand active communal participation in the advocacy among traditional institutions, religious leaders, transport unions, peer groups etc,” they said.
FROM THE DESK OF ANIMAL RIGHTS WRITERS ASSOCIATION OF NIGERIA.

POLITICIANS OF FORTUNE IN NIGERIA BY EMMANUEL ONWUBIKO

Judiciary: Cleaning up the Augean stable By Emmanuel Onwubiko