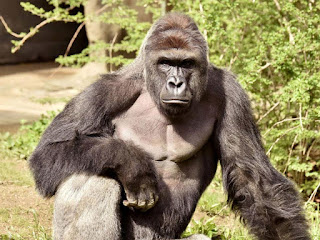 Probe follows international outrage over primate’s death
A criminal investigation has been launched following outcry over the shooting of an endangered gorilla at a US zoo after a three-year-old boy fell into its enclosure.
Cincinnati police have said the investigation will focus on the actions of the boy’s parents and family in the run-up to the incident in which the 450-pound primate, called Harambe, was shot dead by zookeepers after he grabbed hold of the child – who was previously reported as aged four.
The investigation is not into the conduct of Cincinnati Zoo or its safety procedures.
Police said they were taking a second look at possible criminal charges against Michelle Gregg and Deonne Dickinson after initially saying no one had been charged.
A spokeswoman for the department, Tiffaney Hardy, told CNN: “After the review, we will determine if charges need to be brought forward.
“If it is determined charges need to be brought forward, we would then discuss it with the Hamilton County prosecutor’s office.”
Witnesses said the unnamed boy, who was with his mother at the time of the incident, had expressed a desire to get into the enclosure and climbed over the 3ft barrier, falling 15ft into the moat.
Zookeepers then shot the the Western lowland silverback gorilla after he violently dragged and tossed the child around.
Ms Gregg said on Facebook that the boy suffered a concussion and scrapes but was otherwise fine.
She defended herself against the criticism saying “accidents happen”.
But the decision to kill the animal rather than tranquilise provoked outrage around the world with some blaming the boy’s parents for not keeping a closer eye on him.
Animal rights group Stop Animal Exploitation has filed a negligence complaint against the zoo with the US Department of Agriculture.
The group, which is seeking the maximum penalty of $10,000 (£6,913), said in its complaint that the child’s ability to get past the barrier was proof the zoo was negligent and should be fined for a “clear and fatal violation of the Animal Welfare Act”.
The open viewing area in the gorilla enclosure was one of the first of its kind in the world but is now common among many zoos across the country.
Cincinnati Zoo was at the forefront of the movement away from cages and towards more realistic exhibits behind glass walls.
The federal investigators have said they will conduct their own investigation into the incident but zoo director Thane Maynard insisted the “exhibit is safe, the barrier is safe”.
He said it is the first time a visitor has ever breached the Gorilla World exhibit since it first opened in 1978 and a federal inspection two months ago found no problems with it.
The zoo has explained it shot the gorilla rather than use tranquilisers because tranquilisers would take too long to take effect.
FROM THE DESK OF ANIMAL RIGHTS WRITERS ASSOCIATION OF NIGERIA.
http://www.independent.co.uk/news/world/americas/cincinnati-gorilla-shooting-police-criminal-investigation-harambe-killing-parents-a7058981.html