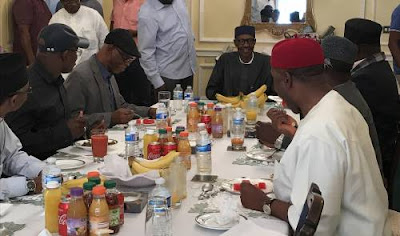 A pro-democracy and non-governmental organization HUMAN RIGHTS WRITERS ASSOCIATION OF NIGERIA (HURIWA) has condemned as wasteful and unwise the series of lunch meetings between governors and the ailing President, Muhammadu Buhari in London United kingdom.
In a related development, the Rights group has lambasted the senate for wasting the historic opportunity of introducing reform minded provisions into the constitution such as devolution of powers  to the Federating units, restructuring and resource control by voting against these amendments.
HURIWA said the action of the senators will further aggravate the various agitations for self-determination in the country. “what has happened today in the Senate is like hitting the death nail on corporate Nigeria because as it is now the nation isn’t working for the millions of Nigerians but is only beneficial to the less than a percentage of the citizens who have constituted themselves into the class of oppressors. We are afraid that soon the sleeping millions of Nigerians will awake from their slumber and take back the Country from the tiny political class holding the rest of the population as hostages”.
Speaking specifically on the series of meetings in the UK at the behest of the medically vacationing President, the rights group  lamented that the Federal government under the current administration is actively encouraging medical tourism of top officials to the United Kingdom at grave costs to the public treasury by these stylish dinner/lunch meetings at the behest of the Presidency.
On the decision of the ailing Nigerian President to invite governors in batches to visit him in London over dinner/lunch at huge public costs, HURIWA dismissed the bonanza as unwise and a disservice to the mantra of good governance and prudence in the handling of public fund.
The Rights group said it would have been cheaper for the ailing/vacationing President in London to address the media in the United Kingdom and pass his message to Nigerians since two or three major Nigerian publicly funded media houses like the Nigerian Television Authority, News Agency of Nigeria and the Voice of Nigeria maintain offices in the United Kingdom and these media houses are watched by significant percentage of the people of Nigeria.
“This ill-advised decision to organize London bazaars of free lunches for State governors at public expense will contribute adversely to the effects of economic recession in Nigeria and will invariably drain the resources of these States whose governors have embarked on these merry- go- round meetings with their wives and close aides exactly 24 hours after they got the second trench of the Paris debt refunds from Nigerian State paid to them.”
On the voting down of landmark constitutional reforms by the senate, HURIWA branded the senators as reactionaries who are happy with the status quo in the country with lots of inbuilt systemic and systematically structured  imbalances and institutional  injustices just as the group expressed apprehensions that civil unrests may be sparked off by this evil decision.
HURIWA recalled that the Nigerian Senate has voted against giving more powers to states in what can be termed a set back to the agitation for restructuring in the country.
The Senate on Wednesday July 26 rejected the proposal to amend the 1999 Constitution in other to devolve more powers to the states.
Out of the 95 Senators present, 48 of them voted against the proposal to give more powers to the states.
The Rights group said this is an evil wind that would blow no one but politicians any good at the long run even as it cautioned that if these misteps aren’t remedied immediately then the nation may implode. The group urged the House of Representatives and state houses of assembly to restore and vote in favour of these landmark constitutional reforms to save the nation from imminent implosion.

Miss Bum Bum 2017 take over the street of Sao paulo