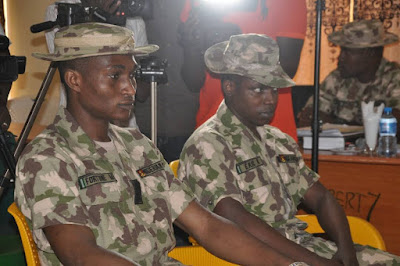 A General Court Marshal sitting in 7 Division Garrison Pompomari, Maiduguri, Borno State, today 26th July 2017, sentenced 2 Soldiers serving in Operation LAFIYA DOLE to 23 years jail terms respectively, based on charges that bordered on  unlawful  possession of Fire Arms punishable under Section 27 (1) (a & b) (i & ii) of the Firearms Act.

The convicts; Trooper Eric Nwokere and Trooper Macaulay Fortune at the time of the arrest were in possession of 5 empty AK-47 rifle magazines and 20,136 rounds of 7.62mm ammunition at Jumputu Motor Park, Jimeta, Yola, Adamawa State, while boarding a commercial vehicle to an unknown destination.
Another soldier, Corporal Garba Saidu, was also sentenced to 10 years imprisonment for unlawful possession of ammunition. The soldier was arrested and charged for illegal possession of 2,800 rounds of 7.2mm (Special) ammunition. He was arrested after discovering the ammunition hidden in a poultry farm near Tipper Garage in Maiduguri metropolis. The farm is said to belong to a serving Nigerian Policeman. He was sentenced to 10 years imprisonment.
The President of the General Court Marshal Lt Col Adamu Hassan said the decision of the court was arrived after close of submissions by both the prosecution and defense counsels. He said the prosecution has proven the case beyond reasonable doubt in line with the burden of proof on the prosecutor to prove all criminal case beyond reasonable doubt.
It could be recalled that the 7 Division General Court Marshal was inaugurated to try misconduct committed by officers and men fighting insurgency in the North East.
KINGSLEY SAMUEL Lieutenant Colonel Deputy Director Army Public 7 Division