As many as 1,000 whales are killed over the summer months every year 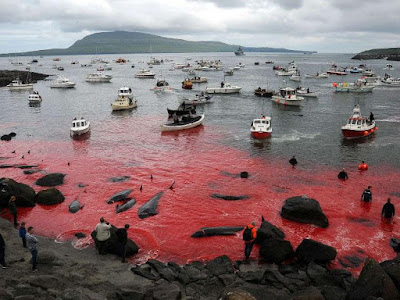 Faroe Islanders have turned the sea red after slaughtering hundreds of whales as part of annual tradition.
The hunt has been criticised by animal rights campaigners, who say the ritual is cruel and unnecessary.
As long-finned and short-finned pilot whales swim close to the shore during migration, fishermen surround the mammals in boats and dinghies, herding them towards the beach.
The entire pods of whales become stranded, are dragged up the beach and slaughtered on the sand or in the shallow water.
The hunt, known locally as the grindadrap, draws large crowds. Many people enter the water to help bring the whales to the sand.
Faroe Islanders are allowed to carry out the annual slaughter by law, which is partially devolved from Denmark’s government, although the legality of the practice has been questioned by activists
“Metal hooks are driven into the stranded mammals’ blowholes before their spines are cut,” the campaign states.
“Whole families are slaughtered, and some whales swim around in their family members’ blood for hours.
“Whales and dolphins are highly intelligent creatures and feel pain and fear every bit as much as we do,” the PETA campaign continues.
There are around 1 million long-finned pilot whales and 200,000 short-finned pilot whales. Although they are not endangered species, campaigners say a lack of regulation around such traditions in the Faroe Islands could see significant reductions in whale populations.
An anti-hunting campaign called Sea Shepherd claims that up to 1,000 pilot whales are killed every year in the summer months and although whale meat is eaten by the local people, some of the meat is left to rot.
The conservation society sends a couple of boats to the Islands every summer to try and prevent locals from herding whales to the shoreline, but last year five crew members were arrested and their boats confiscated.
FROM THE DESK OF ANIMAL RIGHTS WRITERS ASSOCIATION OF NIGERIA.
http://www.independent.co.uk/news/world/europe/faroe-islands-slaughter-pilot-whales-sea-blood-red-north-atlantic-iceland-denmark-ritual-tradition-a7798436.html