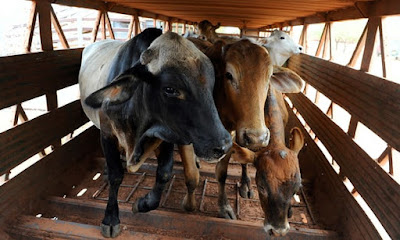 Export cattle are loaded on to trucks on the outskirts of Darwin.
Export cattle are loaded on to trucks on the outskirts of Darwin. The issue of live exports became particular controversial after the airing of a Four Corners program showing treatment of animals in Indonesia. Photograph: Dave Hunt/AAP
A federal Labor minister’s decision to act indiscriminately in banning all farmers from exporting live cattle to Indonesia for six months in 2011 was not justified, a court has been told.
Noel Hutley SC was giving his opening address in the federal court in Sydney on Wednesday in a class action brought by north Australian cattle farmers against the then Labor government agriculture minister, Joe Ludwig.
They claim the ban cost them hundreds of millions of dollars but the current hearing relates to the alleged liability of Ludwig who, Hutley said, may or may not give evidence.
The group, led by Brett Cattle Company, is alleging “misfeasance in public office” by Ludwig.
Hutley said the issue of live exports had been controversial for many years but became “volcanic” when a May 2011 ABC Four Corners program aired footage showing the “appalling” and “abhorrent” treatment of animals in facilities in Indonesia.
Ludwig was familiar with the live animal industry, having a long background of involvement in rural issues, and in September 2010 told key stakeholders he had no intention of making any “drastic” changes within his portfolio, including live animal exports.
Hutley listed various reports, memos and other material that he said were provided to Ludwig in the lead-up to the airing of the program.
They included advice to him, days before the program, to continue to work collaboratively with industry to voluntarily improve the welfare of Australian livestock in Indonesia and to revisit regulation if, and when, voluntary efforts failed to deliver improvements.
Alive and kicking: Australia’s animal export trade booms despite persistent claims of cruelty
But two days after the program he “was rushed into taking dramatic steps” and made a control order banning export to 12 specific locations and then a second control order on 7 June that banned the export of non-breeder livestock to Indonesia for six months.
Ludwig is accused of making the second order with “reckless disregard of its invalidity and consequences”.
The hearing is continuing before Justice Steven Rares.
Earlier on Wednesday, the deputy prime minister, Barnaby Joyce, told reporters the ban had been a “stupid decision”.
“Everybody knows, even the Labor party knows, it was an incredibly bad decision,” he said. “Whether it was an illegal decision, is something entirely different. That’s determined by the court.”
FROM THE DESK OF ANIMAL RIGHTS WRITERS ASSOCIATION OF NIGERIA.
https://www.theguardian.com/australia-news/2017/jul/19/labors-2011-live-cattle-export-ban-to-indonesia-not-justified-court-told