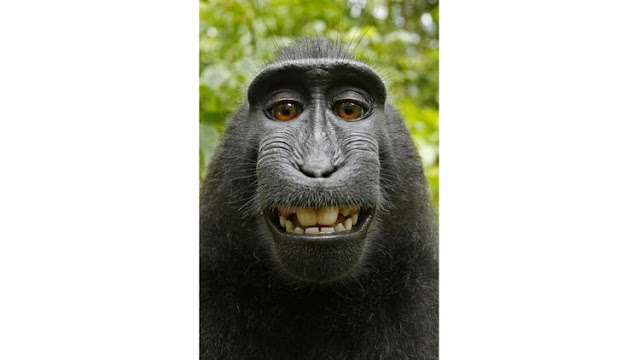 A federal appeals court appeared highly skeptical Wednesday that a monkey had standing to sue for copyright protection.
During a hearing, a three-judge panel of the U.S. 9th Circuit Court of Appeals considered a lawsuit by an Indonesian macaque named Naruto. The animal allegedly grabbed a photographer’s camera in 2011 and snapped a self-portrait.
Photographer David Slater included the photo in a book. An animal rights group sued on behalf of Naruto, contending the photographer infringed on the monkey’s rights.
“It is absurd to say a monkey can sue for copyright infringement,” Angela Dunning, an attorney for the photographer, told the court during a hearing in San Francisco. “Naruto can’t benefit financially from his work. He is a monkey.”
It is absurd to say a monkey can sue for copyright infringement…. He is a monkey
A federal district judge in San Francisco decided last year that Naruto lacked standing to sue. People for the Ethical Treatment of Animals, an animal rights group representing Naruto, appealed.
Dunning told the 9th Circuit that PETA filed the case simply to promote its campaign to give animals more rights. The group was “not even sure they have the right monkey,” she said.
Judge Carlos T. Bea asked why the case should not be dismissed.
Can you point to a U.S. Supreme Court holding that says “man and monkey are the same?” Bea asked David Schwarz, a PETA lawyer.
Judge N. Randy Smith wanted to know what injury Naruto had suffered.
There was no loss to the animal’s reputation or evidence that a copyright would have benefited Naruto financially, Smith noted.
“I want to know what then is the injury,” Smith insisted.
Schwarz said the injury was the copyright infringement.
Smith, unconvinced, then asked whether the federal copyright act “authorized animals as well as people to sue.”
After Schwarz struggled to convince the court that Naruto had a case, a lawyer for the photographer tried to change the subject to money.
Andrew J. Dhuey, representing Slater, said PETA should be required to pay the photographer’s legal fees to defend himself.
“Monkey see, monkey sue will not do in federal court,” Dhuey said.
The 9th Circuit could rule at any time.

King Jong-Un will not get away with his threats , says Donald Trump.

AS APC ‘BRINGS’ORDER FROM CHAOS BY EMMANUEL ONWUBIKO