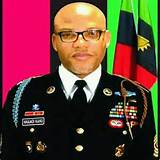 Self determination group- the Indigenous peoples of Biafra (IPOB) has on Sunday insisted that it will campaign for total boycott by South Easterners of the Anambra governorship poll and the 2019 elections unless there’s a date for referendum.
In a statement by the spokesman Mr. Emma Powerful IPOB also alleged that government has concluded plans to deploy 18,000 fresh soldiers made up of Hausa/Fulani to secure the coming Anambra governorship poll. It expressed fears that members of IPOB campaigning for election boycott may be targeted for arrest and intimidation by the soldiers. Excerps from the media release made available to TNIN states as follows: “We the Indigenous People of Biafra (IPOB) worldwide under the command and supreme leadership of Mazi Nnamdi Kanu have resolved totally and without equivocation not to participate in further elections in Biafra land from November 2017 in Anambra State up to the coming General Election in 2019, unless the Federal Government of Nigeria gives a specific date for referendum to determine once and for all time if the people of Biafra wants to remain in their present state of humiliation, servitude, bondage and hopelessness in Nigeria.” “The era of crooked Nigerian elections and imposition of Hausa Fulani slaves in the guise of politicians in Biafra Land from Abuja has gone and will never be tolerated again.
Until there is an agreement in principle for a date to democratically ascertain the will of the people of Biafra, IPOB will campaign for a total boycott of elections. We are not unaware that the Nigerian Government and her security agencies have perfected plans to deploy 18,000 new security operatives entirely made up of Hausa Fulani officers during the Anambra State Governorship election in November 2017.
Northern dominated Army, Navy, Police, DSS and Civil Defense Corps will come to kill, maim and kidnap our people on that particular day but we are not deterred”. “It is very pathetic that some hired hands and unity beggars in Nigeria have adopted the unenlightened and illiterate approach of always equating self-determination with war.
Makes us to wonder what sort of education these people received, if at all they went to school. It is the Arewa North who are calling for war not “US”. IPOB is a genuine peaceful organization that is following the stipulated laid down rules of the United Nations and African Charter which Nigeria ratified and adopted in their constitution. Referendum for Biafra is all we are asking for not war. It is the only civilized way to settle this burning issue of Biafra once and for all time.” “We are aware that some unscrupulous
individuals and groups wants to use call for war to frighten IPOB into submission. We cannot allow such to happen because we don’t respond well to threats.
The more Hausa Fulani oligarchy threatens war the more determined we become. Such silly threats can work with Northern minorities not IPOB. To prove this point, the Nigeria Government and her Hausa Fulani dominated security operatives have been abducting, killing, humiliating and burying our members in mass graves since 2014 yet IPOB is still here and have not turned violent.” “We are not interested in anything violent or war to achieve the sovereign state of Biafra because IPOB have many potent weapons than AK47, bombs and mortars. Truth as our leader said Mazi Nnamdi Kanu has been preaching all along without fear or favour is the only weapon at our disposal.” “Therefore, anybody waiting for IPOB to engage in violent warfare is wasting his or her time because Nigeria has already collapsed under the burden of incompetence, greed, corruption and institutional laziness. Those clamoring for one Nigeria are the same poorly educated criminal class that put Nigeria in the mess it’s in today. They are too lazy to do anything else or make use of their brain apart from sickening dependence on crude oil money coming from Biafra Land.
One Nigeria encourages laziness and allocation criminality which Biafra government will erase from the surface of this earth when it emerges as an independent nation.”