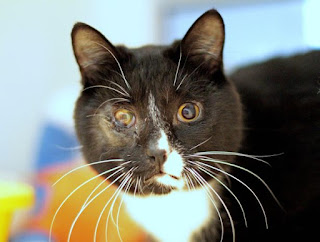 Welfare group Cats Protection has launched an online petition to urge the Government to demand that air gun owners have permits
This black and white cat was left blind after being shot ­seven times with an air gun.
Billy was one of at least 202 moggies shot at by abusers in the UK last year.
And 90 per cent of reported ­attacks happened in England and Wales, where air guns are not licensed.
Now welfare group Cats Protection has launched an online petition to urge the Government to follow Scotland and Northern Ireland which demand that air gun owners have permits, Sunday People reports.
An x-ray of Billy showing the pellets
Cats Protection’s Jacqui Cuff said: “The reality of an air gun attack on a cat is horrific.
“We found 44 per cent of UK vets treated cats attacked by air guns last year, and 46 per cent of cases proved fatal. That’s around half of cats dying from their injuries.
“Those who survive ­endure considerable suffering. Owners can face upset and huge vet bills.”
Teen cow abuser blames cruelty on ‘split with girlfriend’ after footage leaked by undercover activists
She added: “Cats and other animals in England and Wales are vulnerable to being the victim of an air gun attack because there is nothing to stop air guns falling into the wrong hands.”
Billy was taken to a vet after being found injured by a passer-by.
One eye had to be removed and he was left blind in his other eye.
Thousands of villagers sling cow dung at each other in strange street fight for ‘good health and prosperity’
X-rays showed his whole body and head were peppered with air gun pellets. Four had penetrated his skull and it is thought he had been injured for several days.
Thankfully Billy, who is thought to be five years old, has found himself an owner, Emily Doyle, of Heathfield, East Sussex. And he has learned to cope with his blindness.

CHECK OUT THE CUSTOMIZED PLATE NUMBER OF TOKE’S NEW RIDE

AS APC ‘BRINGS’ORDER FROM CHAOS BY EMMANUEL ONWUBIKO