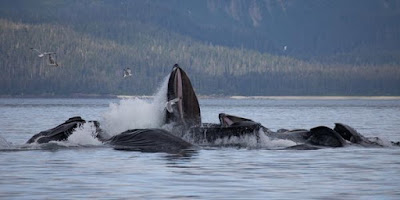 They may not look like much, but zooplankton support some of the most important ecosystems on Earth. And for some animals, like certain whales, they are their only source of food. But a process called seismic surveying – the blasting of airguns underwater to locate oil and gas deposits in the Atlantic ocean – could have devastating effects on this important link in the food chain.
A recent study revealed that “Blasts from a single seismic airgun caused a two-to-threefold increase in dead adult and larval zooplankton within 24 hours.” And that’s just ONE airgun in one 24 hour period, the Trump administration could permit up to five companies to begin seismic blasting in the Atlantic by the fall! If the companies do get permits they will be blasting 20 -40 airguns, simultaneously, virtually nonstop for months on end! Imagine the damage it could do!
But the populations of the various zooplankton are not the only ones in danger. The Federal government, by its own estimates, admits that airblasting in the Atlantic would kill nearly 140,000 marine mammals. Whales and dolphins all succumbing to the confusing, ear-popping and invasive airguns that could soon bombard the Atlantic.
Add your voice to the growing chorus of people who say no to airgun blasting in the Atlantic Ocean. Sign the petition and tell the National Marine Fisheries Service to cancel moving ahead with the permit process for airgun blasting, and then call your representative to tell them you want the process banned completely.

Nigeria as a very dangerous place By Emmanuel Onwubiko

HOW GOVERNMENT STEALS FROM THE POOR By Emmanuel Onwubiko

*Lunch Meetings in UK with President are a Drain to public Fund- says HURIWA: *condemns Senate’s rejection of Restructuring: