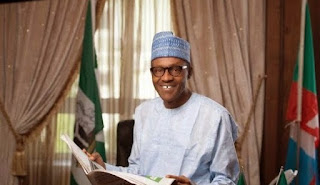 A pro-Democracy and Non-Governmental organization- HUMAN RIGHTS WRITERS ASSOCIATION OF NIGERIA  (HURIWA) has faulted the claim of Senior Media Assistant to President Muhammadu Buhari that the Presidential jet was packed in London to await President Buhari’s discharge from hospital and that it was a global standard.

The Rights group said there was no global best practice that prescribes that a nation’s ruling political elite can ruin the domestic health sector to necessitate a seemingly endless medical tourism by members of the political class on public expenses including President Muhammadu Buhari who has spent cumulatively over 100 working days convalescing in a British medical facility at serious financial and logistical costs to the ever shrinking public treasury of Nigeria.
In a media statement endorsed jointly by the National Coordinator Comrade Emmanuel Onwubiko and the National Media Affairs Director Miss Zainab Yusuf, HURIWA said in over a century there hasn’t been any antecedent whereby a leader of a sovereign state would be flown to a faraway sovereign nation in another continent and such an ailing President spends incredible amount of time receiving medical help whilst  the Presidential jet maintained at public costs would be parked at a foreign aviation facility to accumulate huge bills which the national fund would be deployed to offset.
HURIWA therefore challenged the Spokesman of President Muhammadu Buhari Malam. Garba Shehu to show Nigerians any evidence of this kind of prolonged medical sojourn abroad by any political leader of a country to justify his claim that the practice was a global standard.
“HURIWA thinks we should be ashamed of ourselves that we can’t get the best of medical facilities in Nigeria due to prolonged period of mismanagement and organised robbery of public assets by successive and current politicians instead of attempting to tie a wool of confusion and half baked media propaganda on gullible citizens by rationalising over a practice that has no global best practice or historical antecedents “.
The group said even the Head of State of Vatican city Pope Francis  who administers a Sovereign entity and even the Prime minister of United kingdom Theresa May patronize commercial airlines which are cheaper and therefore wonders why a poor and foreign aids dependent nation like Nigeria can embark on such a ruthless spending free of frittering millions of foreign currencies to sponsor medical tourism of the President and to accumulate huge expenses in parking the Presidential jet idly for many days and even maintain the accommodation of a retinue of pilot and flight attendants attached to the Presidential fleets.
The group reminded the Presidential spokesman that David Cameron as Premier of Britain was photographed taking a ride on a public underground train.
HURIWA said the Presidential jet if parked in Abuja will costs nothing and that it will take few hours to be flown to the United Kingdom any moment the ailing President recuperates and wishes to be flown home.
“The other time,  did the Acting President Professor Yemi Osinbanjo not fly into Italy for the G7 global summit on migration of Africans and jetted back home the same day? Why waste scarce public fund to park the jet belonging to Nigeria in London to await the President as if public property has now become a family property?This is corruption of the severest type when public property is used recklessly just like a privately owned asset by the occupant of the office of Nigeria President.“
“We regret to state that there is no such antecedent whereby a national leader who embodies the national  sovereignty of his country would patronize a foreign Medicare at grave costs to public treasury and to therefore seek to justify or rationalize the callous extravagance of parking the Presidential jet of Nigeria in a foreign territory for as long as one hundred days is absolutely unacceptable and must be halted. Let the Presidential jet be retrieved and return to the Presidential wing of the Nnamdi Azikiwe International Airport Abuja Nigeria until such a time the President is prepared to return to work when hopefully he would have regained his health”.
HURIWA recalled that the Presidency says it is constrained to decry criticisms, mostly on social media, on the retention in London of Nigeria’s Presidential Aircraft, NAF 001 as “mostly informed by lack of understanding of protocol around foreign trips by Heads of State all over the world”.
The spokesperson to President Muhammadu Buhari, Garba Shehu, said in a statement on Thursday that for reasons of protocol, national security, diplomacy and prestige, “no world leader who travels abroad and is left without plans for immediate return or possible evacuation”.
The statement said from an operational point of view, Nigeria’s Armed Forces as represented by the Nigeria Air Force are not to abandon their Commander-In-Chief in whichever circumstance he is. “This is a standard operating procedure”.
HURIWA however disagree with this official line of arguments because according to the Rights Group it makes more economic sense to park the Presidential jet here in Abuja the political soul of Nigeria and even in terms of national security the jet as a public property is better parked in Nigeria in this unprecedented case whereby the President is spending over one hundred days overseas caring for his failing health.

A REV FATHER SHARES HIS JOY AS HE Resigns from priesthood