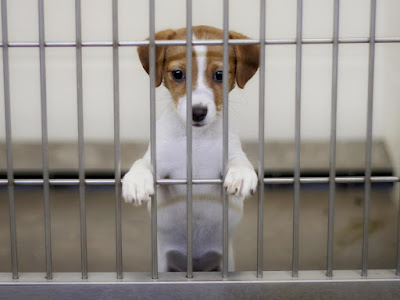 Anyone breeding and selling three or more litters of puppies a year will have to apply for a formal licence
The sale of puppies under the age of eight weeks is to be made illegal under plans to crack down on so-called backstreet breeders.
Anyone breeding and selling three or more litters of puppies a year will have to apply for a formal licence under tougher rules announced by Environment Secretary Andrea Leadsom.
Smaller breeders as well as commercial breeders will have to meet a “strict welfare criteria” and those who sell pets on the internet will be subject to the same licensing regulations.
Breeders who break the rules face an unlimited fine and up to six months in prison.
Ms Leadsom said: “Everyone who owns a pet or is looking to introduce one into their life will want to know that the animal has had the very best start to life.
“Yet for thousands of puppies born each year to irresponsible breeders, from smaller operations to larger puppy farms, their first weeks are spent in cramped and squalid conditions without the care and attention they need.
“That is why we are cracking down on the worst offenders by strengthening the dog breeding licence and giving councils the power they need to take action.”
Dogs Trust veterinary director Paula Boyden said: “As the UK’s largest dog welfare charity, Dogs Trust welcomes the Government’s review of animal establishments licensing in England and the range of measures it sets out.
“We are particularly pleased that it will be illegal to sell a puppy below the age of eight weeks and that there will be tighter licensing rules which will require sellers of pets to display their licence when advertising.”
Kennel Club secretary Caroline Kisko said: “We are pleased that Defra will be taking forward proposals to ban the sale of puppies under the age of eight weeks by commercial third parties.
“We have called for a ban on third party sales, and refuse to register puppies being sold to third parties, but this new rule is a step in the right direction.
“We also welcome the requirement for pet sellers to provide written information about the animals they sell and for those who sell pets online to display their licence number.”
Battersea Dogs & Cats Home also praised the plans as a “welcome first step”.
The charity’s chief executive Claire Horton said: “It’s high time we put a stop to the many undercover backstreet breeders and large-scale puppy farmers that profit from their cruel treatment of these animals.
“No puppy should start its life in cramped, squalid surroundings, before being torn away from their mother at a few weeks old.
“So many owners buying their new pet would be horrified to know that this was indeed the case.
“Toughening the current dog breeding licensing rules and making it completely illegal to sell puppies younger than eight weeks old is a welcome first step and we now look forward to working with the Government to see these plans be put into practice and progress further.”
From the desk of:Animal Rights Association of Nigeria-07040303030
http://www.independent.co.uk/news/uk/home-news/animal-rights-dogs-sale-puppies-under-eight-weeks-illegal-backstreet-breeders-a7558471.html

Trump and the Parable of the Cave By Emmanuel Onwubiko

Top 15 Single Nollywood Actresses Who Are Not Considering Marriage Yet