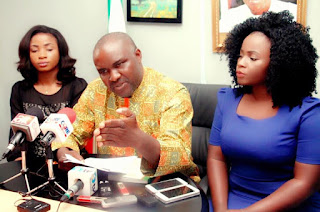 A pro-democracy and non-governmental organization-HUMAN RIGHTS WRITERS ASSOCIATION OF NIGERIA (HURIWA) has asked the erstwhile governor of Rivers State Rt.Hon. Chibuike Rotimi Amaechi and his successor in office Mr. Nyesom Wike to stop dragging names of their spouses or families in the political mud of discord.

In the considered opinion of the rights group, the family unit is such a fundamental foundation of the whole society that it must be insulated from quicksand and ethically depraved political disagreements amongst divergent political camps anchoring to win or retain political power in Rivers state come 2019.
In a statement by the National coordinator comrade Emmanuel Onwubiko and the National media Affairs Director Miss. Zainab Yusuf, HURIWA asked the duo of governor Wike and the transportation minister Chibuike Amaechi to exercise restraint and decorum and respect their distinctive families.
HURIWA admonished both the current and former Rivers State governors to limit their disagreements to pure ideological crusade and argue based on political facts and figures and avoid the temptation of reducing their conversations in the public domain to the “bedroom issues” of their wives or children because the family as the foundation that builds an enduring society must not be destroyed because of temporary political fights.
HURIWA therefore condemned the revelation in a radio programme by the governor of Rivers State Mr. Nyesom Wike in which he was reported as casting aspersion on the wife of the transportation  minister for allegedly receiving monthly settlements from the political appointees in the state executive council under her husband for eight years.
The Rights group dismissed this line of public allegations as wholly unnecessary and uncalled for especially coming from the Rivers State governor who is looked upon by millions of youth and human rights organizations as a symbol of virtuous Christian family man who is reputed  to be enjoying a very happy and joyous family life.
“We plead with these two political giants of the Niger Delta to respect the African traditional value system and leave their families out of their temporary political infighting. The family’s sanctity must not be unduly violated”.
“The political battles of the two should basically be focused on political ideologies and not to engage in infantile “Kitchen- like quarrels” of petty traders”.
The Rights group reminded both Chibuike Amaechi and Nyesom Wike that: “In Africa for instance, the traditional background of the family encouraged all members of the respective families to promote, protect and nurture the basic African cultural values like respect for elders; community fellow feelings as reflected in communal land tenure and ownership; live-and-let-live-philosophy, altruism (including economic and medical variants of it): and hospitality.”
HURIWA argues that since the family builds the world, all African families and families everywhere in the world should promote those attributes which projects the common good of humanity.
“Such attributes includes peace, unity, love, social justice and truth. That is the real meaning of traditional marriage especially against the background of African family value system”.
HURIWA recalled that Rivers State Governor, Chief Nyesom Ezenwo Wike, had alleged that each commissioner and local government chairman in the state paid the erstwhile governor’s wife, Judith, N3million and N2million monthly respectively.
HURIWA quoted the as saying that: “while some paid N3million, others paid N2million to the Amaechi’s wife. He said he was aware of the payments because he was Chief of Staff to Amaechi and had knowledge of what happened then”.
Wike, reportedly made the revelation during an interview on Rhythm FM Port Harcourt on Monday.